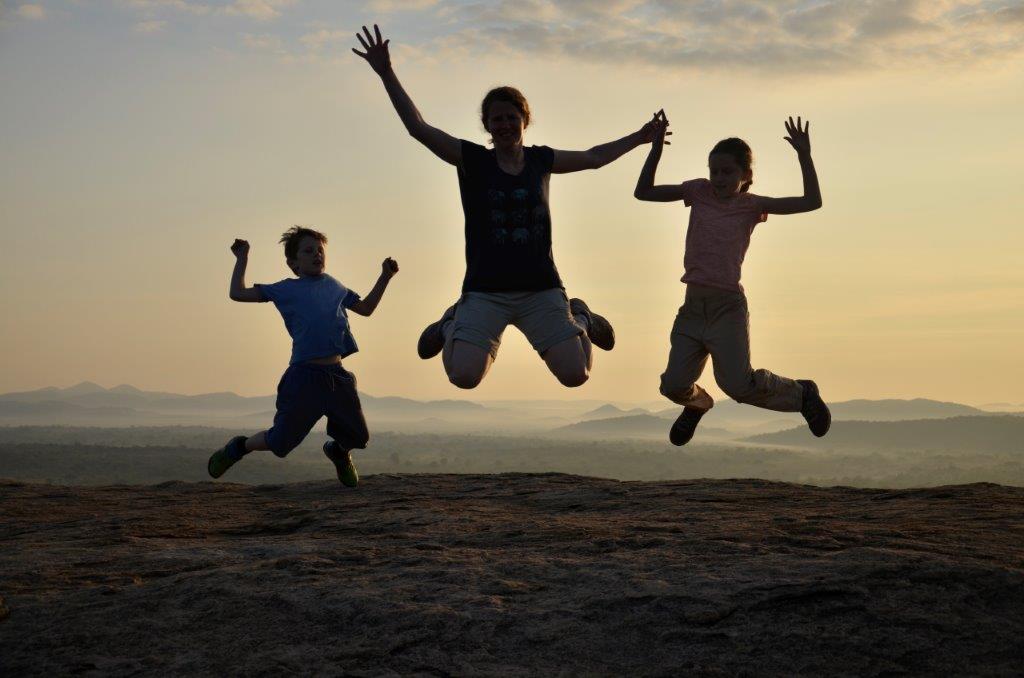 Our homestay in Sigiriya, Binara Villa, was in a lovely quiet rural location a few hundred metres away from the main road. Quiet apart from the Geckos, Cicadas and dogs – the night-time barking of the latter causing some sleep deprivation.., but a lovely homestay, pretty much all to ourselves during our stay, with excellent breakfasts and friendly hosts with a young daughter that our children got on well with – sharing toys and watching a Harry Potter film together on our tablet.

There were daily island-wide power cuts (due to the severe lack of rain in recent months) for few hours in the afternoon and then again from about 8 to 9 pm. These didn’t affect us too much (in fact gave excellent night-sky viewing) but clearly businesses were hit hard. The cuts ended on our last day – a couple of days before the Sinhalese and Tamil New Year (13 & 14th April).

There was a lake half a mile away which all the locals used for laundry, washing and bathing. Upon entering the lake via some concrete steps, small fish nibble at your legs and feet. This is quite a surprise when you’re not expecting it, and caused both kids to squeal a bit getting in, getting some smiles from the locals already in the water. Away from the steps, the fish activity abated and the water was a lovely temperature. We were later informed by our host that it was crocodile free – we didn’t even know Sri Lanka had crocs! The kids and I swam here almost every evening.

Lion Rock, the centre-piece of the ancient kingdom of Sigiriya, is the main attraction here and we went quite early (before 8am) to try and beat the crowds and hot temperatures. There was a bit of a queue to buy tickets (16,290 LKR for 2 adults and 2 kids!), but we had beaten the main rush. The climb up several hundred, sometimes very exposed, steps was quite hard work – the plateau of the Lion’s Gate giving us a breather and some space to appreciate the huge lions paws and remaining steps up . It was still hot at the top, although thankfully the climb was mostly in the shade. .

We ventured to the Dambulla Cave Temple by bus from Sigiriya. This was a straightforward journey, and for most of the ride we had seats. It cost only 200 rupees for the 4 of us (about 90p), the ‘ticket inspector’ identifiable only by the wad of cash in his hand. As long as the bus was moving the temperature was ok…

From Dambulla bus station, we caught a tuk-tuk to the ticket office for the cave temples. We got our tickets and headed up the steps. There are quite a few of these, and we stopped for a breather and water on the way up – it was another roasting hot day. As with all Hindu/Buddhist temples you have to enter barefoot and ensure your shoulders and knees are covered. A small shack takes your shoes and you pay a small fee of 25 rupees per pair to get them back. A long length of matting was provided to help you get from the shoe shack to the temple entrance, but even that was almost too hot to walk on – the ground being even hotter. Smart people wore socks, while we ran whenever we needed to get from A to B over unshaded ground!
We spent quite of bit of time here in the five temples and relaxing in the shade of the courtyard. The quality and quantity of Buddha statues are very impressive as are the thousands of buddha paintings on the ceilings. Jessica’s favourite was the 2nd cave because it was the biggest and had the most Buddhas. For some RE, in the evening, the kids each drew a Buddha from one of the many photos and Jessica researched Buddhism online.

We discovered the Golden Temple, another name for the cave temple but actually a museum and alternative starting point for visiting the caves, on our way down following some steps out of the cave temple. We had started to wonder where these steps led when we caught a glimpse of a huge golden head… We didn’t enter the museum depite our ticket price including it – the kids had had enough and we needed to feed them!

Pidurangala Rock – this was an even earlier start to try and get to the top before sunrise. We left at 5am in the dark by tuk tuk. The path up was dimly lit, but Dawn and I had headtorches to help light the way. Quite early on, Elliot managed to trip over a tree root, grazing his knee and hands, so after that the kids had our headtorches. After the second Buddha statue, a large recumbent Buddha that has been repaired due to thefts over the centuries, the climbing got more difficult (& the route less obvious). The final ascent being a short climb over some rocks (Elliot loved this bit!).

There was a short queue at this stage, but we were soon at the top which is a large, fairly flat dome shape with plenty of space to wander about. There were 40 – 50 people already there and more arriving in dribs and drabs behind us, though it didn’t feel busy at any point. There was cloud on the horizon, but we still got to enjoy a good sunrise and stayed longer than most, taking photos of Lion Rock as the light changed and allowing the kids to run around a bit (we had arranged for the tuk tuk to collect us again at 8.30am, so had plenty of time for lots of photos and to simply enjoy the views).

Later the same day, we hired some bikes from Relax Homestay, just down the road from our accommodation. They had a good selection of bikes including kids bikes and after some saddle and handlebar height adjustments, we ventured out for a hot and sweaty ride around the local single-track lanes. At one point we decided to follow a cattle driven cart taking people on the relatively expensive ‘village tour’ (for a traditional village life experience). This led us to a lake where some ramshackle double-hulled boats were used to take people to the village. We were offered a 15 minute tour of the lake for a ‘you name the price, you happy, you pay’ fee. Our initial offer was met with a sour face, but a couple of hundred Rupees more settled the price. We ditched the bikes and with our skipper squeezed into the end of one of the hulls with a single oar, were quite energetically rowed around the lake which had plenty of bird life and allegedly several large crocs.

Our next stop was Habarana, only a short distance away, so we took a pleasant tuk tuk ride through the forest to get there.

One thought on “Sigiriya”