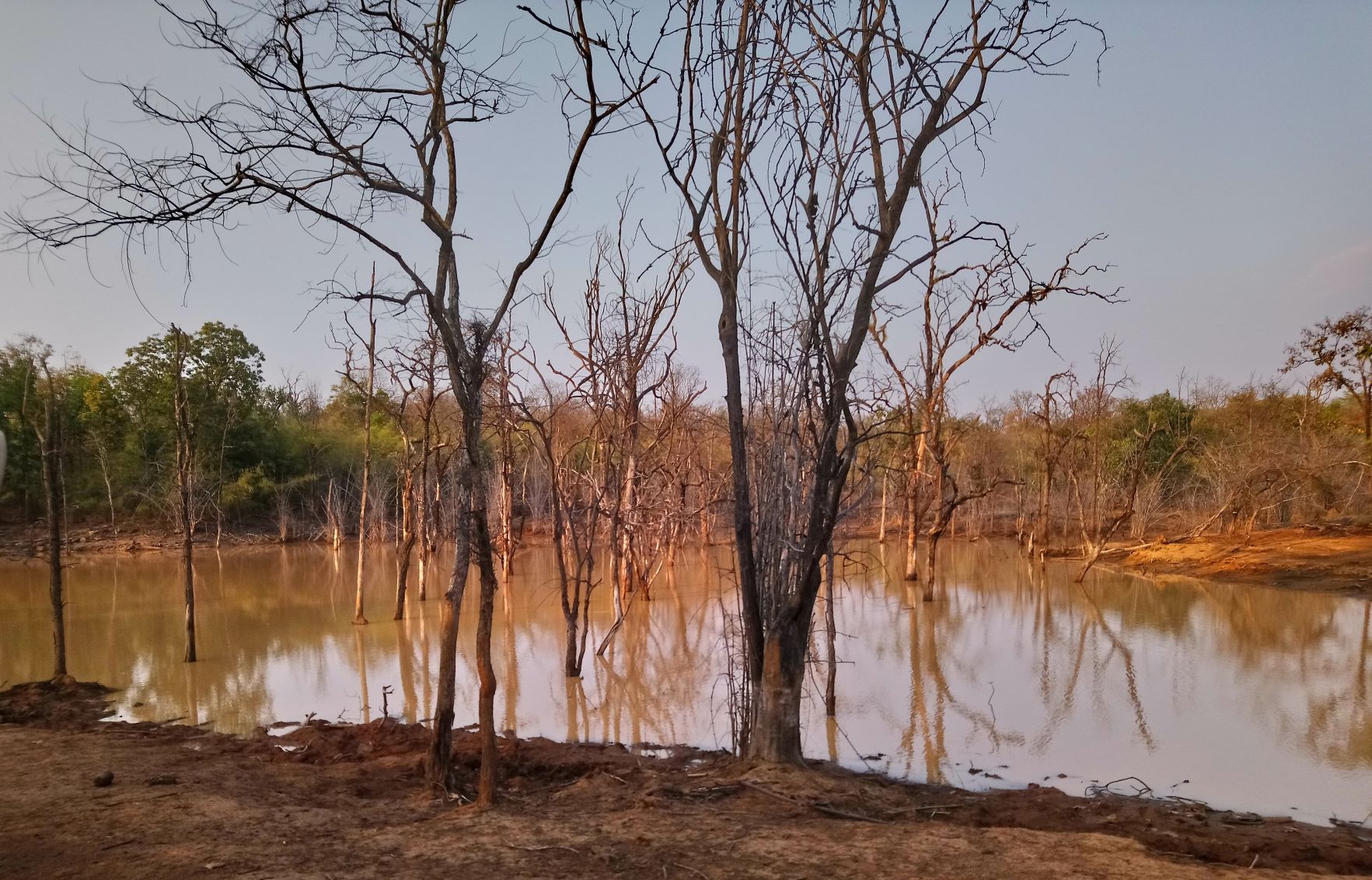 Elliot’s thoughts: The best bit was the safari even though it was a bit boring when we didn’t see anything. The second safari was the best because we saw elephants, an Indian hare, a kingfisher, a blue bull, a serpent owl and a sloth bear. I don’t have a favourite because they were all BRILLIANT!!

We had to be quiet because we had to listen out for animals, because the animals would be scared if we shouted loudly. When we were near the elephants we had to be very quiet because if we made a noise they might charge at us. When the elephants were walking they were pushing down trees. We saw a big water hole where animals drank from. When we were on the jeep there was loads of stones that were really bumpy when we drove over them.

We alighted from our train at Umaria station just after 6:45am.  We woke on the train to views of fields and greenery out of the window; we had left the cities behind us! The train station was blissfully quiet with just a handful of people about and only a few tuk-tuks and taxis waiting outside the station.  We loitered on the platform for a while, checking out taxi options. There is no Uber service out here in the sticks, and so we contacted our Hotel via WhatsApp. At the same time we were accosted by a couple of local tuk-tuk drivers. As we received a price of Rs 1000 from the Hotel owner, we got an offer of Rs 600 on the platform, and being of tight-budget, went with the tuk-tuk option (we can all have lunch for a little over Rs 400 if we share food and only drink water).

Umaria to the Tala gate of Bandhavgarh National Park is a 35km journey, a long way squashed together in a tuk-tuk, but refreshingly cool with natural air-conditioning in the early hours of the morning.  It was a comfortable ride once out of the roadworks in Umaria (resurfacing in progress), up until the point we got to the speedbumps as we approached Tala through the National Park. As we neared our destination – the grand sounding Narmada Palace Hotel, our driver helpfully pointed out wild deer and monkeys in the park and said that they occasionally see tigers on the ride in; we weren’t so lucky.

Lunch at our favourite restaurant in Tala (Gitanjali restaurant), with the usual fennel seed and sugar mouth refresher (Mukhwas) which we all like – esp. the kids:

A few shots taken in an around Tala:
(There’s really not much to see on the main street – just a few eateries, run-down buildings and tourist shops selling clothes, paintings and trinkets)

Our first safari was an early one – a 6am start (still dark), and we saw plenty of wildlife: the ubiquitous black-faced grey langur monkeys (also all over the town), spotted and sambha deer, blue bull, wild boar, peacocks and a kingfisher, but the tigers were being elusive. It was a 4 hour safari with a short breakfast break where all the jeeps gathered, and there were shacks selling chai and samosas with a spicy sauce. The loos were the bushes for the men and a 3-sided straw/bamboo shack offering a modicum of privacy for the ladies.

Between safaris we had an entire day of thunderstorms – uncharacteristic at this time of year, but the rain was a welcome respite. Fortunately, there were a couple of Indian girls at the hotel (Naiain and Novia) – aged 10 and 4, and the kids spent a lot of time playing with them. The older girl’s English was very good, and she could explain to Jessica and Elliot how to play games that they enjoyed – including some card games.

Our evening safari had two main highlights; some elephants crashing through the trees in front of us – our guide Mohan was concerned that they would charge us, so instructed our driver to turn the jeep round in case we needed to make a speedy escape! We stayed there and watched for quite a while and got several good pictures before they moved on. The other highlight was a sloth bear which we stopped to watch for a while. Also spotted on this safari – short-eared owl, chickens, peacocks, monkeys, heron, indian hare, eagle, plenty of deer.

Our next train station was a couple of hours away by taxi and we set off just before 2pm. We had our first encounter with ‘Delhi Belly’ and Nick wasn’t feeling too well, having to lie down on the platform, and struggled a bit carrying his rucksack onto the train. It was another overnight journey(4.30pm til 10am), but this time we weren’t seated together. This train was to take us to Kalyan Junction near to Mumbai so we could catch another train the following day to take us south to Goa.

Our hotel in Kalyan Junction turned out to be the most luxurious on our travels to date – equivalent to a Premier Inn in the UK, with plenty of hot water, and comfy beds. The wifi didn’t quite reach into the rooms, but this seems to be fairly common and we can usually get a half decent data connection using our Indian SIMs.