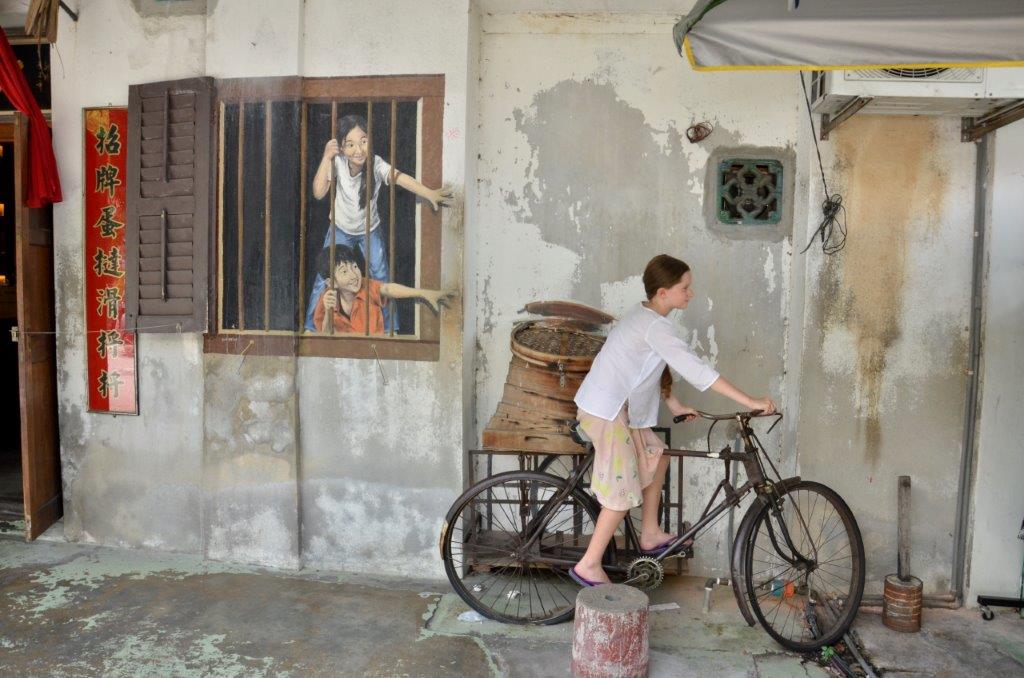 This blog entry has been taken over by Jessica…

We arrived on 29th May late at night, with thunderstorms and heavy rain. Over the next few days we found Malaysian SIM cards and looked at Georgetown, which had street art paintings on walls with half-bicycles and stuff sticking out – all by the same person.

We came across a Chinese Clanhouse, (Leong San Tong) Khoo Kongsi, a fancy building and museum. We paid to go in.

After some drinks, went to the Chinese Chew Clan jetty – when these tribes came they lived on jetties to not pay taxes. Dirty water with fish in it, on the jetty touristy shops and houses.

Lunch in the food court nearby, adults shared dumpling-things and Elliot and I different rice, mine in a very hot clay pot. Then we visited a posh old house – Penang Peranakan (the Peranakans being the people who lived there) Mansion. It was full of wood and mother-of-pearl furniture, portraits, one of the tables’ tops a chunk of crystal! The servants’ quarters and kitchen were less posh with displays of pots, pans and cutlery. There were also some remarkably small but comfy-looking adult (?) slippers. What a busy day! Tea brought home from local night market.

On 1st June, we took the funicular train (leant, and controlled by ropes) up Penang Hill. We did the longest mapped nature walk at the top, I took pictures of the flora and bugs (including a caterpillar with ginger fur tufts being chased by 2 dozen ants)

and we visited monkey-cup flower gardens.

With a variety of imported/local monkey-cup flowers. Also, they had a Venus fly trap and some gigantic bugs! Then, deciding not to do the Owl Museum, it was back down the Hill, a tiny lunch and lollipops then the biggest (and maybe our last) temple in Malaysia, Kek Lok Si temple. It was vast, according to Mum, with lots of little bits (1/8 of them gift shops or unimportant bits), and my favourites were, a bit with 4 black haired gods squishing what looked like goblins, and the gargantuan statue of a goddess pouring a pot of gold, easily dwarfing everything else and being on top of the hill.

There were hundreds of turtles in a pond at the bottom, not bothered when a monitor lizard passed by (humans can die from their bite).

After that in the carpark a lady drew our pictures and conned us a bit to buy them, and we called a taxi on Grab, home at 5pm. Booked a bus to Cameron Highlands in the hills for tomorrow.

We left Penang on 2nd June, the bus went on winding roads. I felt a bit nauseous and liked the idea of travel sickness pills.

One thought on “Penang”