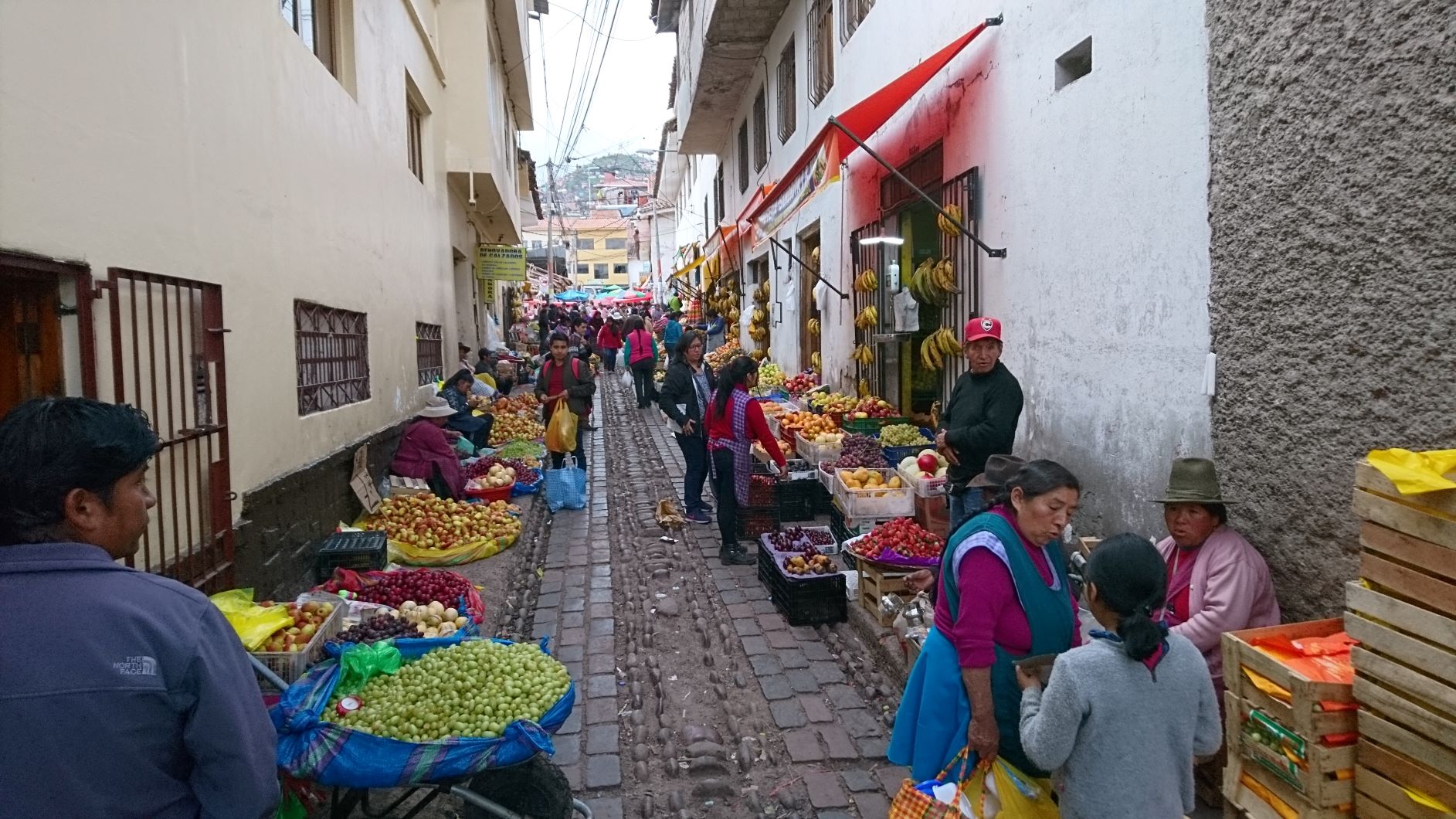 When we travelled along the road from Ollantaytambo to Cusco there were several recent rockfalls, some with crews out on the road clearing the fallen debris. On the outskirts of Cusco part of the road had fallen away leaving the road down to one carriageway and long queues. There were also roadworks blocking off the street our apartment was in. We did eventually find it and were dropped off close by. Our lovely host came to meet us and gave us a run down of what was in the local area to see and do. We planned to spend some time relaxing here over the Christmas period, and our apartment had Netflix, so plenty of film time!

During our stay we found the local market (San Pedro market) to be really good for a wide variety of items, including Christmas presents and food, though our walk there was via a pretty poor part of town.

The small shops located around us stayed open for most of the festive period, shutting a bit earlier on Christmas Eve. At midnight on Christmas Eve there were fireworks being set off everywhere – including in the street below us (pictures below, undergoing major roadworks) until about 1am.

From Cusco we took a local bus to Chincero to see the last of the archaeological ruins we planned to see in the area. The bus was very busy and for the first part of the journey we were standing in the aisle – the kids eventually getting fed up of this and sitting down on the floor! We also got plenty of stares from the local people on the bus. Elliot has been called ‘muy bonito’ several times, much to his disgust!

Alighting from the bus in Chincero, we started our visit with a menu of the day in a small restaurant close to the bus stop. We were lucky to get there early as it got very busy.

The Chincero archaeological park, a couple of hundred metres walk away from the restaurant, was very quiet compared to other sites we had visited and very green and spacious. The terrace walls were very impressive with the Inca style close-fitting stones. It’s fairly high altitude at 3,800m and after a gentle walk downhill into the valley the steps back up were quite a challenge!

We had a look around the markets here trying to find gifts to take home, as well as Christmas presents.

In Cusco we walked through some very chaotic streets to find the Museo Historico Regional only to discover it was shut for renovation. So we went to the small Museo de Arte Popular instead, this housed a lot of clay models and some other sculptures – photos inside are not allowed.

Whilst in Cusco city centre we went to the Plaza de Armas which was full of Christmas markets. A lot selling figures for nativity scenes – big and small.

We managed to cook a roast chicken meal for Christmas day (we had purposely rented a place with an oven) and had some lights and decorations up – bought from the markets. We travelled back to Lima on Boxing day and stayed at a very friendly B&B in Miraflores. Our host even came to the hospital with us as Jessica had developed a nasty cough. This meant we didn’t do anything too strenuous and took advantage of the different board games available at this B&B.

On the recommendation of our host, one outing we did make in Lima was to Punta Hermosa beach. Only residents were allowed to drive into the streets nearby the beach, so we were dropped off nearby and walked down to the beach. We were greeted by security who checked our bags to ensure we weren’t taking anything not allowed on to the beach (glass bottles, and some types of plastics – we’re not entirely sure!). The sea was warmer than we were expecting, and the kids paddled in the shallows. We walked inland to a small restaurant for lunch and tried the local speciality ‘ceviche’ – a dish of raw fish cured in lemon/lime juice served with onions and coriander. Very refreshing, but also pretty strong in flavour – not really one for the kids!

The historic centre of Lima was interesting and we went to the Basilica and Convent of San Francisco taking a guided tour which included the catacombs. The kids were intrigued to see so many ‘real’ human bones in piles of different types – skulls, femurs, etc. We highly recommend the tour here.

The traffic around the centre was awful with many streets either blocked off or at a standstill, so we ended walking a long way through the streets of China Town and other dodgy areas to get to a road with moving traffic where we could call a cab. We saw illegal street vendors running away from police here, or simply hiding their wares, ready to uncover them once it was safe, but they are clearly very poor, sometimes with kids in tow, and need some sort of income, so they sell whatever they can.

The local markets were selling everything yellow, including underwear – good luck for the new year apparently!

We left Lima on the morning of New Years Eve to fly to Quito in Ecuador, the final country of our year-long trip!