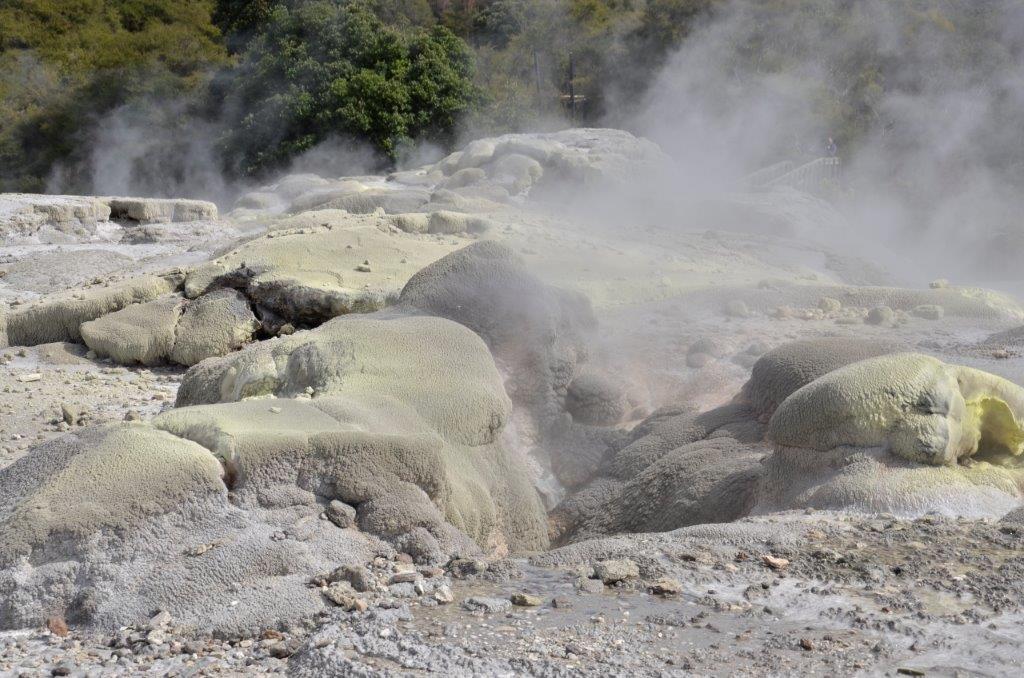 Visiting a few beaches (Sandy Bay, Woolley Bay and Matapouri Bay) along the way, we wound our way south along the SH-1 from Cape Reinga and the Giant Dunes towards Whangarei, the regional capital city of Northland, famous for its Waterfalls.

We parked-up at Whangarei falls and rather than just take a few snaps, decided to include a circular walk which would take us south along the Hatea river below (through Whangarei Falls scenic reserve), through the A.H. Reed Memorial Kauri Park, and past Paranui (a.k.a Pukenui) Falls before returning along some minor roads (Clapham Road and Sands Road which are connected via a track) to get back to a short section of the main road and back into the car park. This was just over 3.5 miles and took 1.5 hours – a very easy walk. We had the usual complaints from the kids but we know (hope) that they will appreciate all these walks and grow up to enjoy the countryside!

Along the roads back we saw some interesting post boxes… Australia and New Zealand are, in fact, covered with bespoke and unusual post boxes in all shapes and sizes. If we’d stopped to photograph half of them, we’d have quite a selection to show..

We took some time to visit Whangarei itself which is quite a pleasant town, especially along the Quayside area which is pedestrianised and dotted with cafes, restaurants and gift/artisan shops. One old chap who passed us was riding a very noisy converted lawnmower as a mobility scooter and blasting out tunes over a stereo – quite a character!

Within Whangarei harbour we had identified a freecamp area along Beach Road in Onerahi. There was space for 4 or 5 vehicles here and we claimed our space quite early. This area is along quite a long stretch of road without speedbumps, and as a result, the local youths use it for speeding along until quite late. Fortunately it went quiet well before midnight and we were undisturbed after that. It was a very pleasant place to wake up in with friendly locals out and about and views across the water.

We had decided not to pay for any gloworm tours as we passed the famous caves at Waitomo (before we got up to Cape Reigna), partly becuase there were free alternatives such as the Waipu caves to see gloworms. This was now the next thing on our to-see list, and the Waipu caves were due south of us, albeit a little out in the sticks along several miles of gravel road.

The car park, which is also a freecamp spot, was quite empty on arrival and we headed straight to the cave entrance across the field, sporting a variety of torches. It was pretty slippery inside and getting to a properly dark cavern area involved crossing a shallow stream 3 times. The best footwear to use here would be beach shoes, or sandals that you don’t mind getting wet. We’d all worn trainers or walking boots! The large cavern contained thousands of gloworms. Miniature green spots of light, they lit up the cave roof like the night sky. We hadn’t thought to take the camera tripod in with us, but we managed to get some long exposure shots by resting the camera on the ground..
You really have to see these creatures first hand – photos don’t do them justice!

The Waipu caves were our last stop in Northland, and we drove South past Auckland towards Rotorua, stopping en-route to camp at Gulf Harbour, where we had first overnighted with our campervan. With glorious sunshine and calm waters, the area looked quite different compared with our first wet and stormy visit. It was a Saturday morning when we left, after kicking a football around for a while, and very busy with boats being launched from the jetty.

Once in Rotorua we took advantage of a deal on the Thl roadtrip app and booked into a campsite which included an outdoor unheated pool and two indoor thermal pools. These were just about the hottest hot pools we’d ever been in and were a bit too hot for the kids who were in danger of becoming par-boiled. Refreshed by our soak, we enjoyed a very peaceful night here. The campsite was far enough away from the town to be quiet and also not too smelly from the geothermal activity!

Parking up by Rotorua lake, we went for a stroll along the lakeside and happened upon a group of Maori taking a traditional canoe out for a paddle – this included a lot of chanting in time with the paddling and was quite a spectacle.

We walked on past the Te Awara War Memorial, to the very colonial style Government Gardens, complete with bowling club and tea house, and past the (closed for rennovation) Rotorua Museum – quite an impressive building.

We then followed the path alongside Sulphur Point wildlife Sanctuary. The winding path here provided several good views across this geothermally active section of lake with its azure, steaming water and colourful shoreline along with the inevitable sulphurous bad-egg smell and a few bubbling mud pools. There were signs everywhere saying not to go onto the shoreline – presumably it’s hot in places and even unstable, but we saw a couple of tourists way out there taking photos.

Going south on state highway 5, we took the summit track (Te Tihio Ruru) up to the top of Rainbow Mountain. It was about 1.5 hours each way, and we managed this trail, which wound it’s way through quite dense forest, with little complaining from the kids, despite it including 500m of altitude gain. There were great views from the top, but it was extremely windy there so we didn’t stay for long. This mountain also has a popular mountain biking trail that is kept separate from the walking trail. On our way down, we passed a group of cyclists pushing their bikes up – I was a little jealous of their imminent descent..

A bit further south and accessible down about 2km of gravel road are some free geothermal pools at Kerosene Creek – a slightly unsettling name for somewhere you’re planning to bathe… From the car park we followed the river for about 50m to get to the bathing area, the main one of which was just below a small, but powerful, waterfall. This was already quite busy, but there was room for us to join in. We stayed for a long while – it was a good temperature and shallow enough to relax in.

Not far from Kerosene creek were the Wai o tapu mud pools, these were also free to access and quite mesmerising; the mud bubbling away with plenty of satifying eruptions and associated glooping sounds.

The weather in the area was due to turn cold(er) and rainy so we decided to drive North to Papamoa Beach where there were a number of free-camping spots. However, the council here only allows 2 vehicles to overnight in each huge carpark, and every one we visited was already occupied. The sun went down while we were trying to find a space, and so it was in the dark that we headed north to Tauranga and the Waitui Reserve on the Te Puna estuary, which was the nearest alternative free-camp spot. We were the only people here and the loo was the cleanest we had seen in a while. This turned out to be a safe and quiet overnight spot despite some reviews complaining of trouble from locals.

Back in Papamoa the following day (nice and early this time to make sure we got a beachside spot for the night!), we treated ourselves to a mid-afternoon indian takeout which was just, well, sooo overdue and much appreciated by all!

After checking the weather forecast again we decided to carry on along the coast for another day before heading back towards Rotorua the following day. We ended up at the small town of Kawerau and discovered the free municipal swimming and thermal pools there. This was an amazing facility albeit fairly busy in the main thermal/Jaccusi pool with elderly couples no doubt having their peace spoiled by a noisy family.

Back in Rotorua we arrived at Te Puia, one of the most popular geothermal sites in Rotorua, early, and paid the $135 (NZD) to get in. This gave us views of and walks through the several geothermal areas including the impressive Pōhutu geyser which we watched erupting on two occasions – it can be an hour between eruptions and the build up is slow, but once it’s going, it’s very impressive to watch and lasts over 10 minutes. We also saw a pair of kiwis (the only ones we got to see during our tour of New Zealand) in a specially designed low-light enclosure, a few mudpools (not as spectacular as the free ones) and a mock-up Maori village. We took time to visit the New Zealand Māori Arts and Crafts Institute on the site, and watched some Flax craftwork in progress, plus a lot of wood and stone-carving students at work on a variety of pieces. This was very interesting to watch.

There is a traditional Maori meeting house on site and cultural shows of the pōwhiri welcoming ceremony that we had participated in at the Waitangi Treaty Grounds. We watched the welcoming part of a ceremony, which takes outside the meeting house, here which is quite funny to watch, but taken extremely seriously by the Maori.

Our 700 mile journey from the north down to Rotorua..