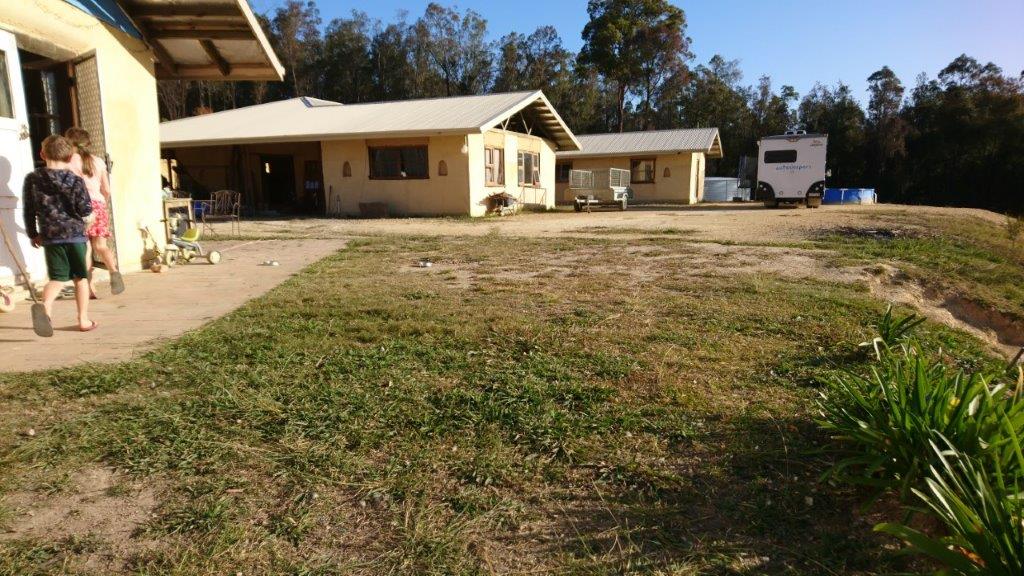 On our way to Eungai Creek, we made a quick stop at both Shelly Beach and, above it, Captain Cook Lookout. This was another impressive view-point where we glimpsed a few migrating whales in the distance.

We stayed for a week with the Robinson family in Eungai Creek who were building their new home (the Harvest House) from straw bales. All of the main structure was complete and we helped out with the last bit of internal rendering of the straw, stripping and varnishing second hand window frames and other general work. Our kids got on really well with their two daughters, and they seemed to spend the entire week playing lego together and watching movies! There were also some ducks and chickens and two dogs who were real characters.

This week made a much needed change from continually being on the road and, in addition to great company and super food, we also had the added bonus of real beds to sleep in.

From here we had a day out at South West Rocks and visited Trial Bay gaol, which had an exhibition of sculptures some from professional artists and others from local schoolchildren.

After saying our goodbyes to the Robinsons, who’d been excellent hosts, we visited Port Macquarie, Flynns Beach and then stayed at another showground in Kendall.

We had a quick visit to Dooragan National Park – this was a steep and windy drive up to North Brother Lookout where we took in the views of the surrounding areas of Laurieton and North Haven. We also did a short walk around the rainforest with Nick and Elliot trying to mimic the whip-bird call. Elliot did a much better job! This walk offered occasional glimpses of the views over Crowdy Bay National Park to the South.

In Australia many of the beaches we visited were very quiet and the one at Pilot Beach Reserve was no exception. We took a stroll out along the breakwater here and watched huge waves crashing against it on the eastern side.

Our next stay was at Wingham Riverside Reserve (another donation campsite). Shortly after arriving a guy arrived to welcome us and to give us some brochures for the local area. The reserve was home to a massive flying fox colony that all leave the shelter of the forest at dusk to go and feed, it’s quite a spectacle that we watched on both nights of our stay there. We also walked round the reserve during the day and observed them all sleeping in the trees, they were surprisingly fidgety and noisy whilst half asleep. It was pretty smelly here too.

We spent a few hours looking around the town of Wingham and visited the museum. The museum houses items from 1800 onwards covering health, wood/timber e.g. sawmills (and a working, very detailed, automated sawmill model), gems, a sample settler’s home showing a laundry, kitchen, bedroom and craft items, and also stories of local history such as that of the murderer and fugitive Jimmy Governor who was incarcerated here.

In the town’s central area is Wingham ‘Central Park’ which is surrounded by a number of historic buildings. The park, completely brown on account of the drought, proudly displays a huge, 19 tonne, tallow wood log as a reminder of the importance of the town’s early logging history, and a vampire jet (the engine of which was on display in the museum). This was donated to Wingham to celebrate the 50th birthday of the RAAF.