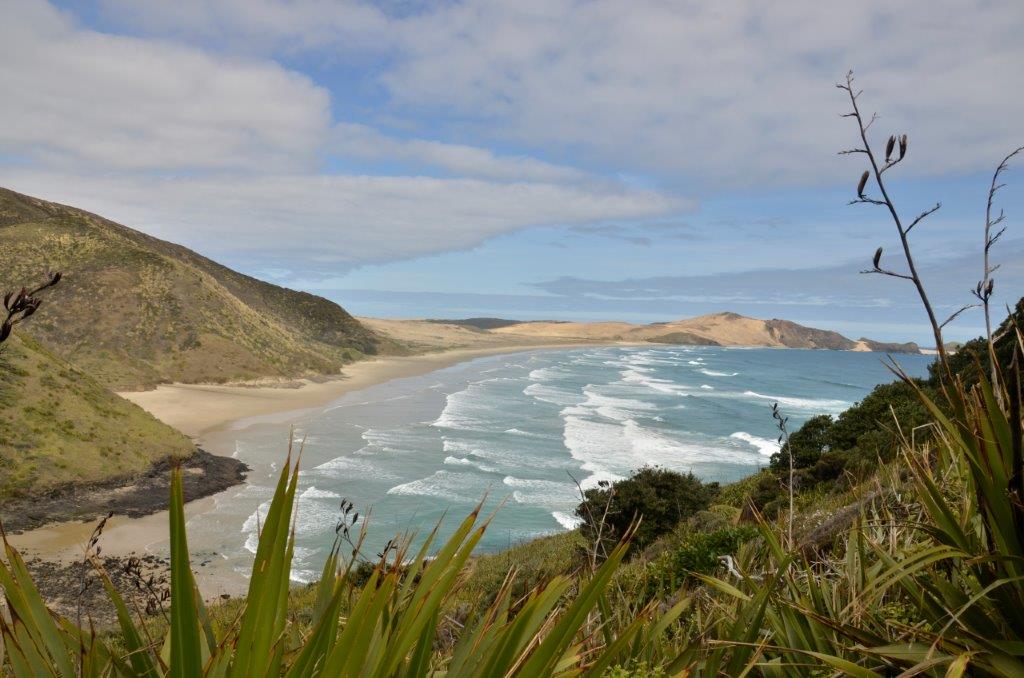 After a late night arrival into Auckland, the following morning we walked to the Britz campervan hire site about 500m away from our hotel. Our wheels for the New Zealand part of our adventure were significantly smaller than those of the 6 berth motorhome we had had in Australia. This meant it was a nicer vehicle to drive, but we had less living space when we were parked up. It also had the disadvantage of a electric-only fridge, which would only last about 3 hours on the leisure battery. We weren’t used to this, because in Australia, the fridge could be powered by gas when parked up and we could go days without mains power. So we had to change our shopping habits and buy food little and often, which didn’t turn out to be too inconvenient.

As in Australia we encountered frustrations with not being able to travel on ‘un-sealed’ roads, which prevented us from going to places we started out to. We called Britz/THL to clarify their policy on this as many campsites on ‘their’ app (a rebranded Campermate app called THL Roadtrip) were down gravel roads. They seemed unable to provide clear guidance, and after a few telephone conversations, said that we could travel on gravel roads as long as they were ‘well maintained’ – thanks! Clear as mud!. However, this made life a lot easier, and we visited, and camped at, a lot of places that we otherwise wouldn’t have. Following our use of Wikicamps in Australia, we also used Wikicamps NZ for sites and reviews here in addition to Campermate (which has the added benefit of providing last-minute deals). It’s well worth downloading the available offline content for these apps, as you may not have a phone signal in remote areas.

We decided to head North from Auckland for the first 10 days or so before visiting the southern half of the island. The weather was very changeable, with a fair amount of rain. This change in climate meant the warmer clothes we had been carrying around to date could finally be got out from the bottom of the rucksacks and made use of! When it wasn’t raining the scenery was spectacular; lots of greenery and rolling hills.

Wes stopped in the Bay of Islands Holiday Park, a pleasant site with mixed accommodations, including several very level RV spots (we didn’t have levelling ramps), a playpark, pool (closed), a sizeable and, fortunately, useable camp kitchen (despite it undergoing redecoration) and gas BBQs. We also got a teeny bit of free WiFi here before they wanted you to pay – though it was far cheaper to buy a pre-paid SIM card with data (which we already had anyway) than to pay for additional data here. After eating our own meal, we were invited to sample ‘Coca Cola Chicken’ – you guesed it, Chicken cooked in Coca Cola (and a lot of soy sauce), by some friendly Chinese guests. It was very tasty!

We decided we should learn something of the history of New Zealand, so went to visit the Waitangi Treaty Grounds. The entry fee here includes free guided tours and cultural show – both very informative and enjoyable – a great introduction to our adventures here.

Tokerau Beach. This was a Freedom Camp right on the beach, on arriving Elliot requested we stayed for a few nights, we remarked whilst there that this may be the best place we might stay in New Zealand and in hindsight I think this may have been true. We had seen several people out in the sea and eventually realised they were cockle (Tua Tua Clam) hunting. Nick was keen to give this a go – on his first trip he returned with about 3 cockles. A few days later we met some locals and got some tips on how to collect the clams (you have to go in more than knee deep at low tide, and one technique is to wiggle your feet in the sand to feel them 6 inches or so below the surface, if you feel them, they are easy to collect just by digging down with your hand). Ater this Nick managed to collect a significant bucket full (there was a legal limit of 50 per person per day at our location) which we enjoyed the following day with a mountain of chips from a chippie that was about to close!

We made our way up to the most northerly point of New Zealand – Cape Reinga. We walked down to the lighthouse for some photos, and then from near the car park, took a track down to a beach and back. This involved quite a descent and climb back up on a very windy path. About a mile and a half each way.

From a distance, on our way south from the cape, we saw the Giant Sand Dunes, and then saw a sign to them off the main road, so decided to take a look. The dunes were incredible, a massive area of coastal sand dunes at the southern end of Ninety Mile Beach, with green hills in the background. There were body boards for hire (here in the car park – and also along the main road – the SH1) to use to slide down the dunes, but we just went for a walk round, and slid and ran down them without a board. They really were worth the visit!

The map below shows our travels during our first week in New Zealand.