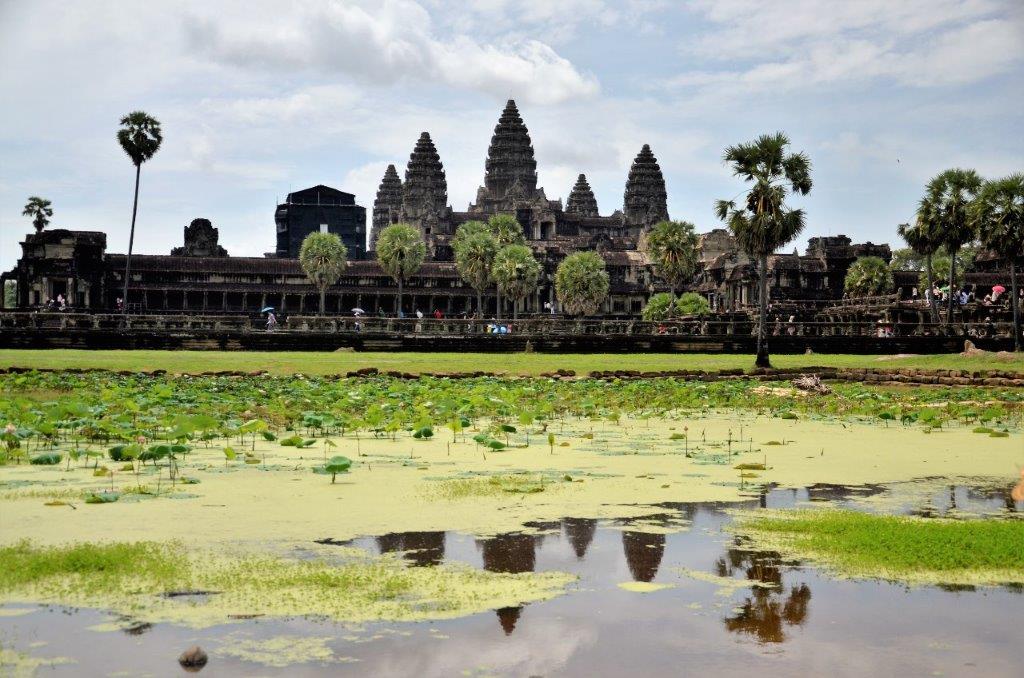 For our stay in Siem Reap, Cambodia, we had booked accommodation at the Community School of Hope which is a family-run school in a very rural setting pretty much equidistant between the airport and the western gate of Angkor Wat. The school is open in the evenings after normal school and offers local children the chance to study English to give them more opportunities in the future. Up to 100 children arrive by bicycle daily enjoying a half hour or so of play in a dusty play area until their teacher arrives, whereupon they very obediently file into the classroom. This homestay was great and we would highly recommend it. It gives an insight into how life really is in a Cambodian village. In addition to excellent home cooked lunches and dinners, it offers tours at very reasonable prices. The school is entirely funded by profits made from the homestay tourism.

On our first morning we hired push-bikes from our homestay and did a ride, in searing heat, to the local monastery at Wat Svay Romeat which sits on the edge of a huge ancient lake, just beyond the end of the airport runway. We attempted to lengthen the ride by a few km to reach a place marked as ‘the beach’ by the lake (which was dry), but it was too hot and the kids weren’t happy, so we turned around an went back, stopping at a restaurant we’d spotted earlier for much needed cold drinks and a very tasty lunch.

It was the beginning of the rainy season, and we had a couple of thundery afternoons with torrential downpours accompanied by the sound of mangoes landing on our tin roof (a sound we soon got familiar with), but the sun soon reappeared and the ground was bone dry again.

Angkor Wat Temple Complex
We purchased a 3 day ticket to the Angkor Wat temple complex (kids were free), but the 3 days do not have to be consecutive, so we decided to do a tour, then have a day off temples before doing another day. Our remorque driver Chet was organised from our homestay and was very good, even allowing Elliot to stay with him in his vehicle for a couple of temples at the end of the day when he had had enough.

It being our first temple, and the most famous, we decided to have a guide to take us round Angkor Wat. The temple is very well preserved and although incredible, huge and intricate and steeped in history, this was not my favourite of the temple structures.

I think the temples speak for themselves in pictures; we visited Banteay Kdei, Srah Srang, Ta Prohm (this was the temple used in the filming of Tomb Raider), Ta Keo, East Gate, Elephant Terrace, Bayon and the South Gate.

On our second temple day we started early to try and beat the heat. We visited the West Gate, Baphuon Temple, Royal Palace, Palilay Temple, Tep Pranam Pagoda, Terrace of the Leper King (this included our earliest Ice Cream stop ever – at about 9.30am!), Preah Khan Temple, Neak Poan, Ta Som, East Mebon Temple and Pre Rup temple. Around 4pm, we finished the day just as a downpour started, this was our only ride in a remorque with the sides down. We were nice and dry, although almost unable to hear each other due to the noise of the rain. There will have been some very wet tourists that afternoon!

Later in the week, we squeezed in a two more temples (Bakong and Preah Ko) en-route to Kanpong Phluk floating village on another day out (below).

Kampong Phluk floating village
Some of Nick’s friends from Singapore happened to be visiting Cambodia at the same time as us, so we spent some time socialising with them and this included a trip to a ‘floating village’, Kampong Phluk. It was quite a sight driving though this village in the dry season – all of the properties on very tall (5 – 6 metre) stilts both sides of a dirt road which would be several metres underwater in a couple of months time – the landscape would be unrecognisable, and boats the only means of transport. We didn’t stop while travelling through the village, but this guy has some good photos which is pretty much how we saw it.

At the end of the road as we parked up and alighted from our minibus, we weren’t entirely sure what we were going to be doing here for the next couple of hours – probably just looking around, and maybe visiting some of the stilted properties? Nope, instead we were led to a long, narrow boat in a very narrow and shallow river – more of a muddy stream really. There didn’t seem to be anywhere to go by boat (you can tell we’d researched this trip well!). It took several attempts and a lot of revving for the engine to get started, which seemed to cause our driver a lot of amusement (his manic laughter was a little unnerving throughout the journey!), but we got underway and after a few minutes the stream opened out and we were tanking along into the huge Tonle Sap Lake – very muddy due to it’s shallowness and the strong winds which had picked up. It looked like we’d be soaked through but were spared a downpour and arrived at a somewhat ramshackle floating restaurant (specialising in crocodile meat) which was our stop for some cold beers and soft drinks as the winds dropped and the sun rather spectacularly edged it’s way over the horizon. There were also some large crocs being stored in the deck below, and baby ones less than 30cm long which the kids got a chance to handle.

War Museum
We decided to go and learn about some of the past events that have shaped Cambodia, so headed off to the war museum. This is located on what was a battle/mine field and is a collection of items used in the war with the Khmer Rouge in the 1970s. We had a knowledgeable guide to take us round who was very informative (although the kids couldn’t understand him!). The museum grounds are full of weapons of war including a Chinese fighter jet, Russian helicopter, various tanks, large artillery guns and different types of landmines. There was a lot of information about the various types of landmines and stories and photos of civilians who have suffered from the legacy of these devices. The dangerous and expensive task of clearing the remaining minefields near the Thai border is still ongoing.

At the end of our week here, we flew back to Kuala Lumpur to finish our Malaysian adventure.