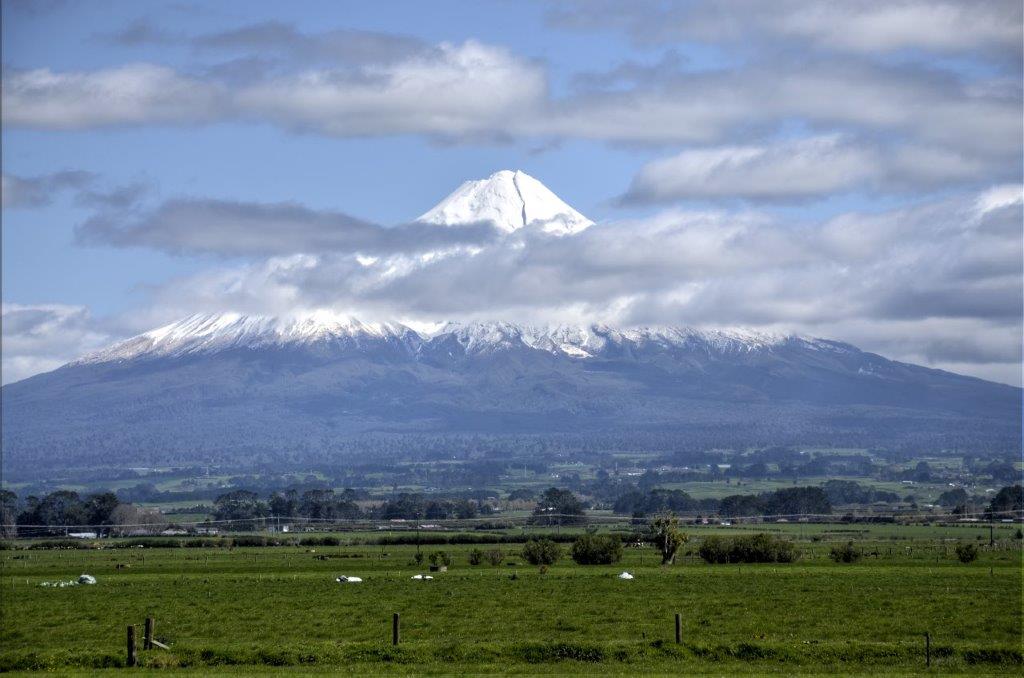 Our first stop in the Taupo area was Huka Falls on the Waikato River. These were very impressive – fast flowing through a very narrow gorge (where you could cross over on a bridge) and a beautiful green colour. There were several jet boats that navigated the river to the bottom of the falls, trying to get their passengers wet in the process – we watched these for a while and Elliot fancied a go!

It was in Taupo that we discovered the Kiwi Guardian trails for kids. There was one in the Spa park nearby, so we went to check it out. We were a bit unclear what we were looking for – it turned out to be a post part way round with a code word that you had to enter online at the website above, to get a medal sent home (we had been told in the tourist office, they would be sent overseas, but subsequently discovered this is not the case, so had two disappointed children!) In the park there are some free thermal springs, which were busy with people settling in for the evening. It looked a very pleasant spot and we could have returned with bathing gear, but decided not to.

Staying in Taupo we went to the Botanic Gardens and did another Kiwi Guardian trail.

We were hoping by the time we finished the botanic gardens the cloud would have lifted over Mount Tauhara, so we could climb it and be rewarded with views at the top. We were in luck! It was a steady uphill climb all the way through fairly dense forest. The views from the top were amazing though, you just suddenly appeared out of the trees.

We visited the Volcano Museum in Turangi which turned out to be a side exhibition in the tourist information centre. It was, however, very informative and the kids enjoyed it – especially the mini earthquake simulator (that you were only supposed to go in once).

We did comtemplate going skiing for the day on Mt Ruapehu, but couldn’t really justify the cost (about £300) and it was also the school holidays, so likely to be busy. Instead we were going to head along the ‘Forgotten Highway’ but on chatting to staff in the Taumarunui information centre we discovered that part of it was closed and some of it was unsealed. The detour was a very long one, so we changed plans again. We had a lunch stop at Omaru Falls which turned out to be a pleasant walk (unless the magpies got you!) and the falls themselves were more impressive than we were expecting. It was showery, but sunny by the time we finished – the umbrellas we’d carried proved useful against the magpies!

We stayed the night in Piopio, a volunteer run park with a large wooden shelter which provided seating and basic washing up facilities. The table had an unfinished jigsaw on it, so we took it upon ourselves to finish it. This kept us amused for a bit and gave us a bit of time out of the van.

From here it was rain…rain…rain! We briefly explored New Plymouth, taking a walk along the promenade. The bendy red pole turned out to be a sculpture – a wind dancing pole.

We stayed at the nearby Lake Rotomanu which was a pleasant camp on the edge of a huge lake. Unfortunately we managed to leave the waste (grey-water) hose for our campervan behind, although we didn’t disover this until a couple of days later. We did eventually replace it, but in the meantime, developed a technique which involved using a plastic base from a re-usable shopping bag as a gutter to guide the water in – we had to drive almost on top of the dump points to do this! One benefit of the rainy New Zealand weather was that we did a bit more schoolwork with the kids than we were usually managing!

We headed south through Stratford – a brief stop for tea (or hot chocolate) and cake as it was still raining. We caught a brief glimpse of Mount Taranaki on our way past – even stopping in a layby for about an hour to see if the cloud shifted for a good view, but it refused.

We headed to Waverley beach – the free camp area here already had the allotted 3 spots taken, but there was an empty low cost campsite a bit further inland. We opted to stay here as there was a shelter with outside toilets, kitchen facilities and a huge room with tables and chairs and another 1000-piece puzzle which we started (and eventually completed). The other main bonus was the power available on the campsite. This was an unusual set-up where you had to visit the town’s library to pay (and they would provide the door-lock code). In the end, we decided to stay for a second night as the weather forecast was once again rainy, and this campsite gave us inside space – we even managed some baking in the oven (something we didn’t have in the van).

In Whanganui we climbed the steps up to Durie Hill Tower and then climbed the 176 steps of the tower to enjoy some good views of the city. On the way we encountered a ‘house on the move’ taking up two lanes of the highway. Fortunately we were on a three lane section when we passed it.

We went in to New Zealand Glassworks and watched the glassblowers in action (something we had tried to do previously in Taupo but there was nothing of interest being made that day) making spinning tops and stretching out coloured rods about 10m long and just a few mm thick, which would be chopped up and used in other pieces. We got a bit of an explanation on the glassblowing process from one of the staff members there.

We started to head north again from here as ultimately we needed to get back to Auckland to drop off the campervan. We went to Lake Rotokare nature reserve which was another donation campsite. It was a double gated reserve and fully fenced to try and allow native species to thrive and keep out the introduced pests, we walked round the lake in the morning, it was beautiful.

We bought a new waste hose at a nearby RV store after unsuccessfully managing to locate the lost one (we even did a small detour back to Lake Rotomanu to check if it was still there – but no luck). Following recommendations of a couple of people, we went to Dawson Falls on Mount Taranaki getting spectacular views of this perfect conical volcano (also known as ‘Mount Doom’ in Lord of the Rings) on the way – see featured image for this post. At the falls, we walked the Wilkie Pools loop which got pretty muddy and wet – the park ranger said it had snowed there the previous day. We then went for a brief look at the falls themselves.

Once again the beach camp we had hoped to stay at was full, so we headed to Tongaperutu domain by the 3 sisters (we had previosly driven past this and knew there was plenty of space). We parked up getting briefly stuck in the mud, but the people in the van parked next to us, jumped up to give us a push!

When the tide was out the following morning we walked down the estuary to the beach to see the 3 sisters and the elephant (rock formations). We walked along the beach taking plenty of photographs.

Our next stop was Mount Kakepuku, which we climbed in the morning after being parked up there overnight. It was a very busy route with plenty of people going (both running and walking) up and down – some of them more than once!

Our final stop before Auckland was Te Kauwhata and it was a lovely sunny day to get all our stuff sorted out in the van, ready to return it.

2 thoughts on “Taupo to Te Kauwhata”