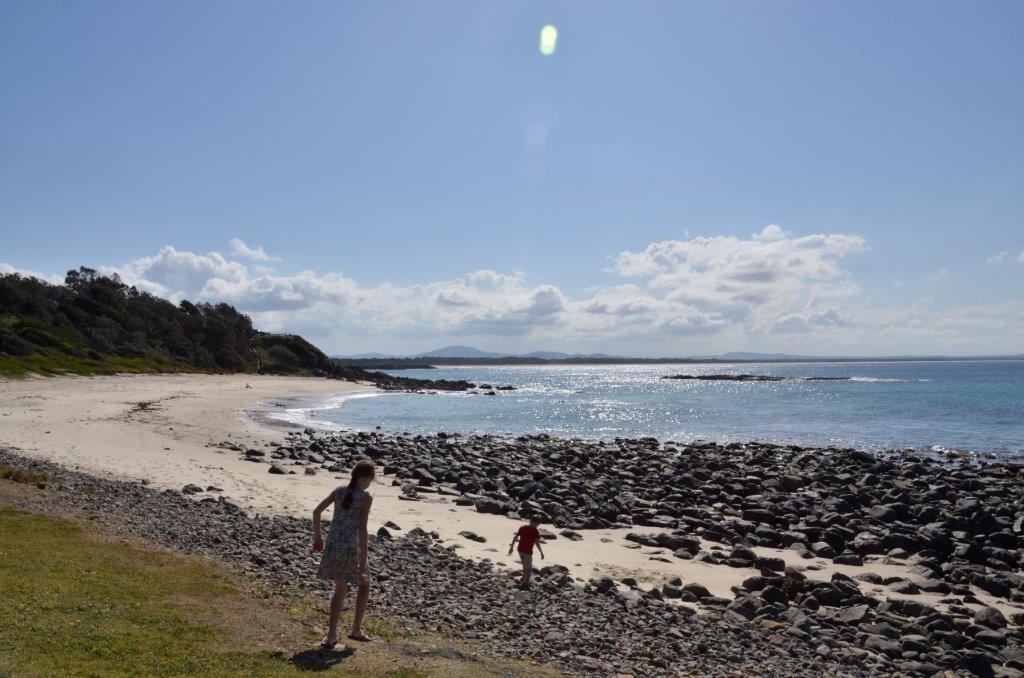 After leaving Wingham, Tuncurry beach was our first stop. We watched a pod of around 10 dolphins swimming parallel to the beach, just beyond the surf. It was a real treat to seem them so close. Forster, nearby, had a pebbly beach which made a change from all the sandy beaches we had seen to date, so we explored the rockpools for a while and then walked to the ocean pool – Nick even managed a quick swim, but it was too cold for the rest of us!

The Bulahdelah area was our next destination as both the Myall Lakes Reserve and Bulahdelah State Forest had walking tracks. We decided to try one of the trails in Myall Lakes Reserve, but the road turned into a gravel track and according to our maps the walking tracks didn’t appear to have any parking nearby – this is an issue when you have a huge vehicle to park up. As we weren’t supposed to drive on unpaved roads in our hired motorhome we decided to turn back and instead went to a parking area for the Bulahdelah State Forest. The path here, the Alum Mountain Trail, started by crossing the Pacific Highway on a footbridge, and then wound gently upwards, through forest, to the Mountain Lookout which gave views looking west over the town. and then we doubled-back for a while and went up to the Ted Baker lookout which gave views to the south and east. The forest had obviously been subject to a large scale fire at some point, but it was difficult to judge how long ago – the smell of ash was still quite evident, despite a lot of new growth. The huge rocky outcrops at the top were pretty impressive.

We experienced our first rainy day in Australia on leaving Bulahdelah and the forecast for the area wasn’t good. We had considered visiting the Nelson Bay area, but gave up and decided to head further south skirting around Newcastle. On the way, we searched online for a swimming poool and found one in Kurri Kurri which was lovely and warm. This gave the kids a break from the boredom of being on the road.

The rain showed no signs of abating here, but did look better further south towards Sydney. The Gosford area had been recommended to us, but we couldn’t find any sensibly priced camping or caravan parks there. We did, however, find a good deal for a caravan park in Umina, a little further south, and so booked in there for the remainder of our time with the motorhome. Here we made use of the DVD rental, kids club sessions, play areas and the swimming pool. On the Sunday, it was the Australian Father’s day and we went for the Father’s day fry-up breakfast – All the dads got a free reuseable plastic cup – woo-hoo!

The park was quite empty and we had loads of space around the van for ball games etc. The park was sandwiched between a very nice (but very windy) beach and woodland and there was a lot of birdlife around including the very colourful Rainbow Lorakeets whom we fed with apple and then had problems getting rid of.

As Sydney was our next stop and our motorhome drop-off destination, we had to get all our belongings packed away into our backpacks. This was quite a task, after nearly 60 days of motorhome occupation!