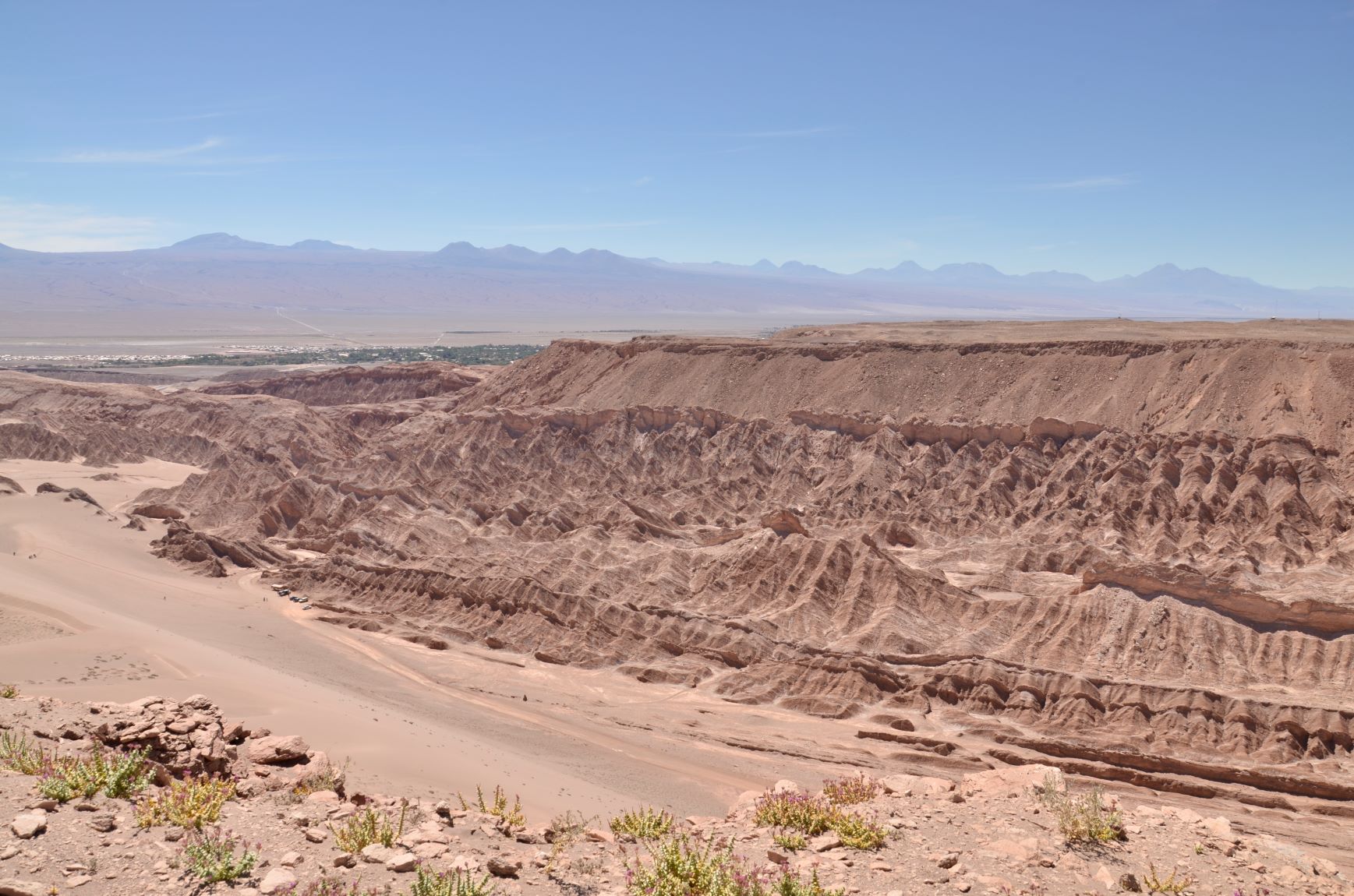 After a brief overnight stop in Santiago, we continued north to stay near San Pedro de Atacama for a few days. On landing at the airport in Calama we encountered the heat of the desert, a bit of a shock after the cooler climes in Southern Chile.

We had booked a hire car from the airport, and picked it up without a hitch and headed to our AirBnB accommodation outside of San Pedro. It was in a small village called Solor with no mobile data reception (phone was ok), wifi or shop, so we immediately had to head out back to town (only a 10 minute drive) to get some groceries.

We didn’t venture to the places that required a lot of driving, or to those that were high in altitude such as the Altiplanic lagoons (4200m), Tatio Geysers (4300m) or Salar de Tara (4400m). Keeping the trips short kept the kids happy, and we wanted to avoid taking them to high altitude areas – we weren’t using any tour companies that would carry oxygen in case of severe altitude sickness. There was plenty to see during our short visit without taking unnecessary risks..

Our first outing was to Valle de la Luna, so named as it is supposed to look like the landscape of the moon. It is very close to San Pedro de Atacama, so didn’t take long to get to. We went early evening to stay for sunset and to avoid the heat of the day. There are also abandoned salt mines at this site.

As suggested by the guard at the entrance we headed to the Great Dune for sunset.

Again to avoid the hotter daytime temperatures, we rose early to visit Laguna Chaxa – a salt lake famous for its flamingos, and we were not disappointed. The flamingos feed on red brine shrimp that thrive here, and this is where they get their pink colour.

On our way back we went to the much less popular valley ‘Quebrada de Jere’ just east of Tocanao. This had some Traditional Architecture, fruit farm area, petroglyphs (rock art) and picnic benches (sadly we had no food with us!) down by the river.

The next place we went to see was Valle de Marte, this is also just outside San Pedro, so we got there just after it opened at 9am. The guards at the gate were once again very helpful, explaining we could go back for sunset as our tickets were valid for the whole day. On reaching the car park by some giant sand dunes, there was a group of ‘sandboarders’ making the most of the cooler morning. The kids decided it was just as much fun to run down the sand dune.

We then walked up to the viewpoint, and continued on a circular walk back to the car park. The views were amazing, and I think this was my favourite of the places we visited in the Atacama desert. At the end of the walk to get back to the car, we had to walk across some of the dunes – by this time the sand was really hot, and Jessica and Nick had open toed sandals; they had a hard time trying to avoid getting burnt feet, using what little vegetation there was to avoid sinking into the sand.

We visited Laguna Tebinquinche, a salt lake close to San Pedro. This included a path that took you alongside the lake shore (you are not allowed to wander around freely). Incredible salt and other mineral formations here.

On our last day we took a drive up towards the Bolivian border along Route 27. The border is along a line of volcanoes, surrounded by other mountains, making for spectacular views into Bolivia- the route took us pretty close to Volcan Licancabur (peak at 5,920m) and Juriques (5,704m). The drive took us up to a fairly high altitude – over 4,600m. It was definitely easier coming down in the car than going up (which had been mostly in 3rd gear)! It was also nice to get up to some cooler air, and away from the heat of the desert. We also saw some herds of alpacas, some even wandering across the road in front of us.

We flew back to Santiago for an overnight stay before continuing onto Peru.