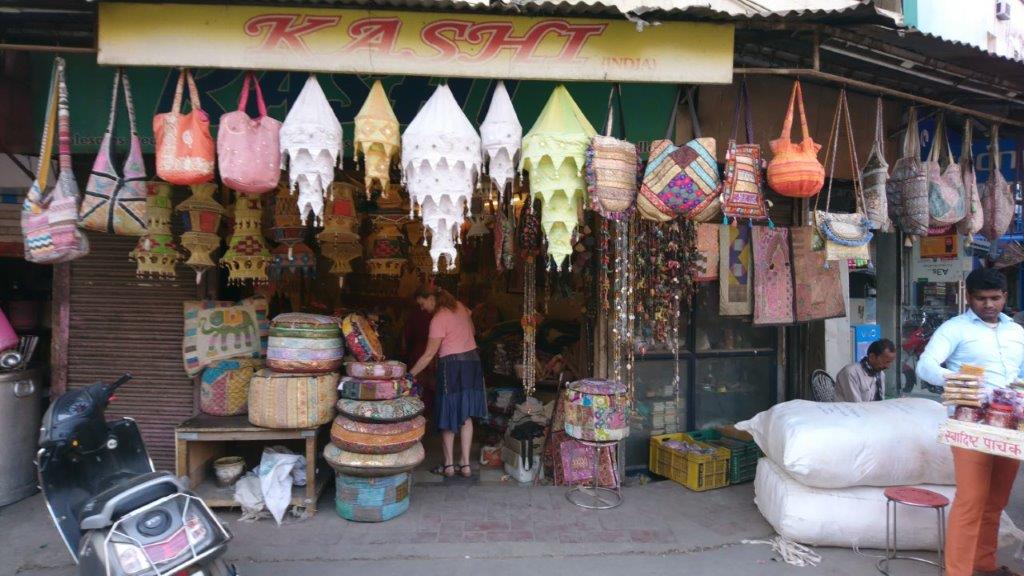 Our trip through India kicked-off with a few days in Delhi, just long enough to get over the jet lag and see some of the main sights. Delhi is officially the most polluted city on the planet, so we didn’t want to be there for very long.

To avoid any potential scam attempts, we used Uber to get a taxi from the airport to the hotel. We were new to Uber, but the process turned out to be very straightforward, (there is an Uber rank in a cark park just outside the arrivals area) you just have to ignore the persistent offers from other drivers as you make your way there.

Half of the boot of our Uber cab was already taken up with large bag, so we only got 1 rucksack in. The rest went on the passenger seat, and we all crammed onto the back seat. No seat belts. There was a bit of trouble finding our hotel – even the street traders nearby didn’t seem to know where it was. We finally spotted it down a very narrow side street (not even passable by rickshaw) after a couple of U-turns in the street which was crazily busy with rickshaws and motorbikes. After rounding up to the nearest 100 Rupees, we paid only about £5 for the 50 minute journey

Our hotel (Hostel the Spot Inn) was pretty basic – no hot water, dirty and noisy, but the staff were very friendly and the free wi-fi worked! The side street it was on was very smelly (mainly of urine on account of 2 open urinals on the corner!), something the kids commented on every time we passed by.

Our first trip out was to the Secretariat buildings and India Gate (Delhi’s version of the Arc de Triomphe) where we’d hoped to let the kids let off some steam in a children’s play park (unfortunately shut as it was a Monday).

We continued our day with Dadi-Poti tombs and Deer Park to get away from the noise of the city. It was dark by the time we exited the park, but we managed to get back to the metro OK, and even got a taste of some sweet rice pudding with nuts being given away as it was a festival.

For a lot of the day we seemed to be the main tourist attraction, with loads of requests from people to take their photographs with us (but mainly with just the kids). In return we got a few pictures with some random families and individuals. The Indian people are very friendly, inquisitive and polite.

The Delhi metro is good – clean and at times very (very) busy, but with frequent trains. We bought a couple of 3-day travelcards – kids are free. You have to go through airport-style security (separate lanes for men and women) to get onto the metro, and the ladies were very puzzled by Jessica’s GPS tracker, not knowing what it was…

Akshardham temple, very close to its namesake’s stop on the Metro is amazing, and very geared up for the tourist. The main temple building (Mandir) is very intricately carved, in pink sandstone on the outside and white marble and gems on the inside. Unfortunately no cameras or mobile phones are allowed, so 2 of the images below are from postcards.

We caught an early train to Jaipur, and despite people warning us that trains are always late and we should take a minibus, the journey went without a hitch (fingers crossed our future journeys will be a similarly positive experience!).

The service on the trains (class CC) is fabulous; you are provided with bottled water, an English newspaper, tea and breakfast, and our 4 hour 40 minute journey passed very quickly. The train was full, and the reclining seats more comfortable than you find on a UK train. The slums and general signs of poverty on the outskirts of Delhi were quite sobering.

From our time in Delhi, the highlight for the kids was a boat ride in the temple (with animatronics that put Disney to shame)…. and their least favourite things were the pollution, smelliness and dirtiness of the streets. They got on with the food very well – we always ate indian with the vegetable biriyanis being a favourite. Elliot seems to have developed a taste for food with a bit of spice already!