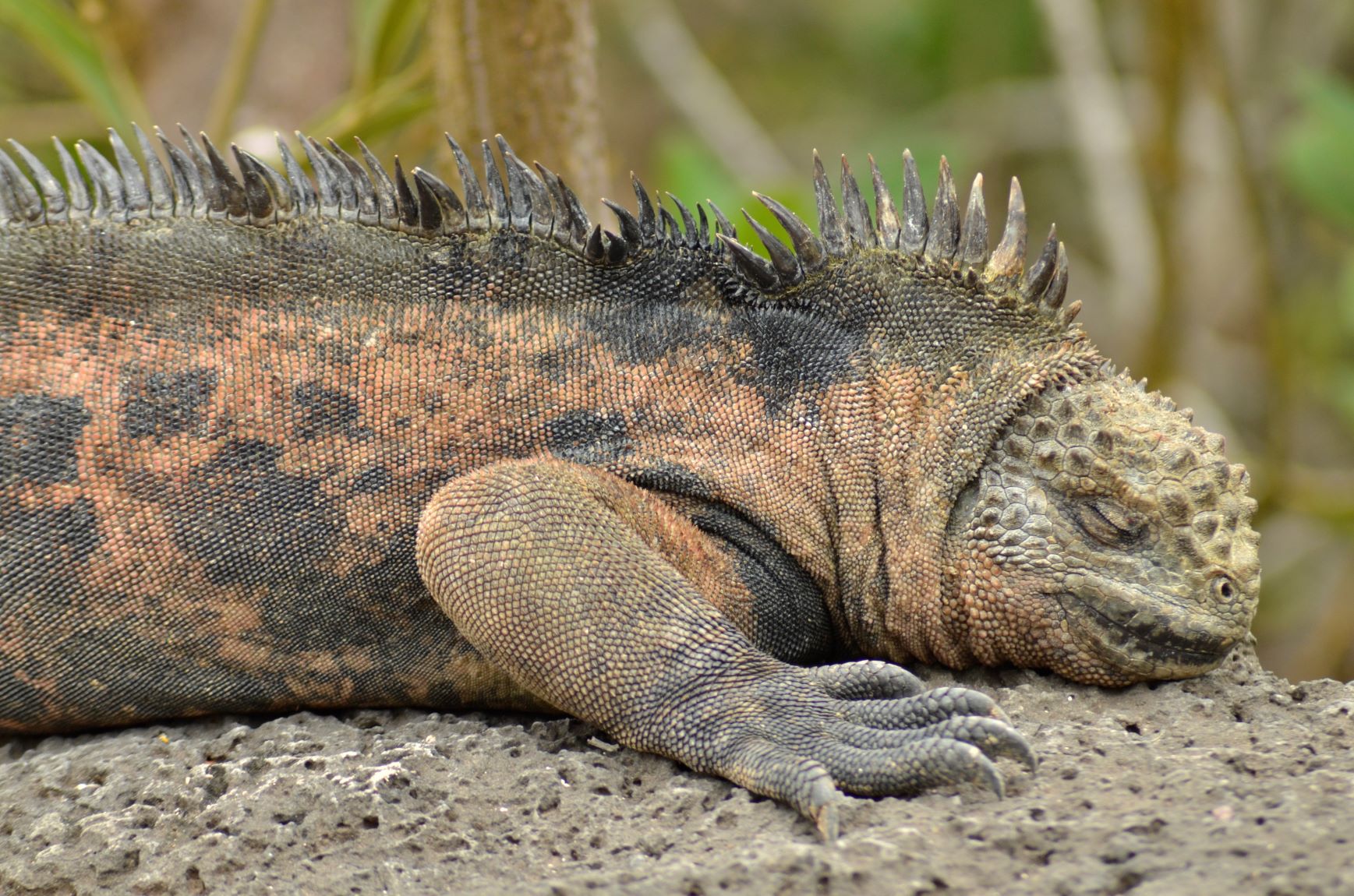 We arrived in Baltra on the Galapagos Islands after a very brief flight from Quito. The procedure at Quito airport took longer than we expected as we had to queue for a Transit Control card, which cost $20 per person, and then go through a baggage inspection (there is a long list of items you are not allowed to take – including plant or animal matter) before the normal airline check-in process. We hadn’t allowed time for this and only narrowly made the flight!

Arriving on the Galapagos, a wave of heat hit us as we disembarked the plane (the pilot had informed us it was 29°C), we then joined a very slow moving queue at the airport to pay (in cash) the Park Entrance fee ($300 for us all, kids are half price) and bus fare ($15 for us all – kids half price again) to get to the ferry at Canal de Itabaca. There is an ATM at the airport to replenish your wallet and we made a couple of $300 withdrawals before going for the bus. During this 10 minute bus ride (packed in with students from America on a school trip) through a completely barren landscape, we got our first few glimpses of land iguanas.

The ferry took us (and our luggage, but not on the same boat) across the ‘canal’ to Santa Cruz (the most populated island) which was to be our base for the next week. Santa Cruz is quite centrally located within the islands, so is an ideal place from which to explore some of the other islands.

The sea lions and pelicans were out lazing on the port as we arrived, and we were the last people to board a bus for the main town of Puerto Ayora the other side of the island. Jessica ended up sitting on the guide’s seat at the very front, with Elliot on the dashboard in front of her, and Nick on a cushion in a small space next to the gearstick, whilst I stood most of 30 minute journey. We spotted some Giant Tortoises during this 40-minute journey and were a little surprised to see cattle and horses as well. I was disappointed with the state of the transport – the same old polluting vehicles as on the mainland; I was expecting that having entered a National Park for a huge fee that all parts of the islands would be more controlled and environmentally friendly. Unfortunately, this was not the case for the town, the ferry or the buses.

We had pre-booked our accommodation in Puerto Ayora and it was on the outskirts of town (everything is very expensive here, so we had booked an apartment so we could cater for ourselves, plus it had a shared pool). It was well past lunchtime, so we found a little eatery near the bus stop and had some freshly made empanadas before catching a taxi to our apartment. The taxis on the island are white pick up trucks, and there is a flat fare of $1.50 to get anywhere within the town.

Our host was very helpful, and we managed in Spanish to find out the best places to buy food, and that she could book tours and lend us bikes.

We took a taxi to Tortuga Bay for our first trip out. It’s a 2.4km walk from the car park to the beach along a well-paved path. There were some huge cacti alongside the path, some small lava lizards (the females easier to spot due to their very red cheeks and throats) and a lot of birds – which could be heard more easily than seeing them.

We arrived at the beach to be greeted by the sight of marine iguanas on the tide line and others walking along the beach. It was a proper picturesque paradise beach. The iguanas made a great noise walking along the sand dragging their tails behind them. We stayed taking in the wildlife – more pelicans and other sea birds and a variety of crabs. After walking the length of the beach we found a calmer beach the other side of the peninsula which was very busy. The kids tried snorkelling, but the visibility wasn’t very good.

We had seen several water taxis leave whilst sat on the beach, and decided this would be a good way to get back to Puerto Ayora. It was a 20 minute ride round the coast and cost us $30 (rather more than we were expecting!) plus the small fee for the water taxi to take you into the port.

We made use of the bikes available to us to cycle to the Darwin Research Centre. It was an interesting exhibition in a lovely air conditioned building. We learnt about the species introduced by humans to the islands, which are threatening the native species. We also visited the Giant Tortoise breeding centre here – the first of several we visited during our stay on the islands. They are fascinating creatures to watch, and here you can view from juveniles just a few weeks old to old-timers over 100 years old – the young are not released into the wild until they are a few years old and large enough to avoid predation by introduced species such as rats, cats and dogs. More information on the breeding programs can be found here.

The centre also has on display the preserved remains of Lonesome George, the sole survivor (until 2012) of his species who’d been looked after at the centre for 40 years, following his removal from Pinta Island where he’d been found.

We visited the small fish market in Puerto Ayora, though not to buy anything – this is where sea lions and pelicans hang about on the street hoping for a free meal.

Taking a water taxi to Playa los Alamanes (German beach), we walked to Las Grietas, a series of deep, brackish pools which sit between cliffs of lava. After registering with the park ranger (you do this every time you enter the national park) we walked down the steps to the main pool. It was very busy and the water was very cold, so I gave it a miss, but Nick and the kids went snorkelling and swam the length of the pool a few times. They spotted some amazing fish – particularly large parrot fish. The water at Playa los Alamanes was however a nice temperature, and there were some very inquisitive birds (Darwin’s Finches) around.

We booked onto a snorkel/dive tour to Seymour Norte (Nick could dive whilst the rest of us snorkelled) sold to us as a nice calm bit of sea, perfect for the kids. We had an early start and were taken to the Canal de Itabaca to board our boat. Our trip had 4 divers and 5 of us snorkelling. Once out it began to feel like the snorkellers were there as a sideline with the focus being on the divers. On our first snorkel the instructor/guide had a buoy which we could hold onto, which was excellent, especially for the children. We saw plenty of amazing fish some black tipped sharks and a couple of rays.

By the end of this snorkel I was beginning to feel queasy, and ended up feeling ill for the rest of the trip. After the first snorkel trip Elliot changed back into his clothes to stay warm. But Jessica and I did another snorkel trip later. We were above the divers most of the time on that trip, and saw many more amazing fish, more sharks and a manta ray. We got cold on this trip so were keen to get back aboard the boat to warm up!

After suffering a leaky mask on his first dive, which spoilt the fun somewhat, Nick tried another one, and had a fantastic second dive, swimming with a group of rays and seeing a variety of sharks in addition to a good variety of fish, giant clams and garden eels. The latter quickly descend into the seabed when approached, but give the seabed a grassy feel when thousands of them come up and sway about in the current.

At lunchtime we saw a turtle swimming close to the boat. We were informed it was mating season, so there weren’t as many swimming about as usual.

During our stay on the island, we also explored a couple of smaller beaches (Playa de la Estacion and Playa Rotonera) near the Darwin Centre in Puerto Ayora, but found neither to be particularly special after being spoilt with Tortuga Bay.

The next item on our itinerary was a day trip to Floreana, a two-hour boat trip south from Puerto Ayora.