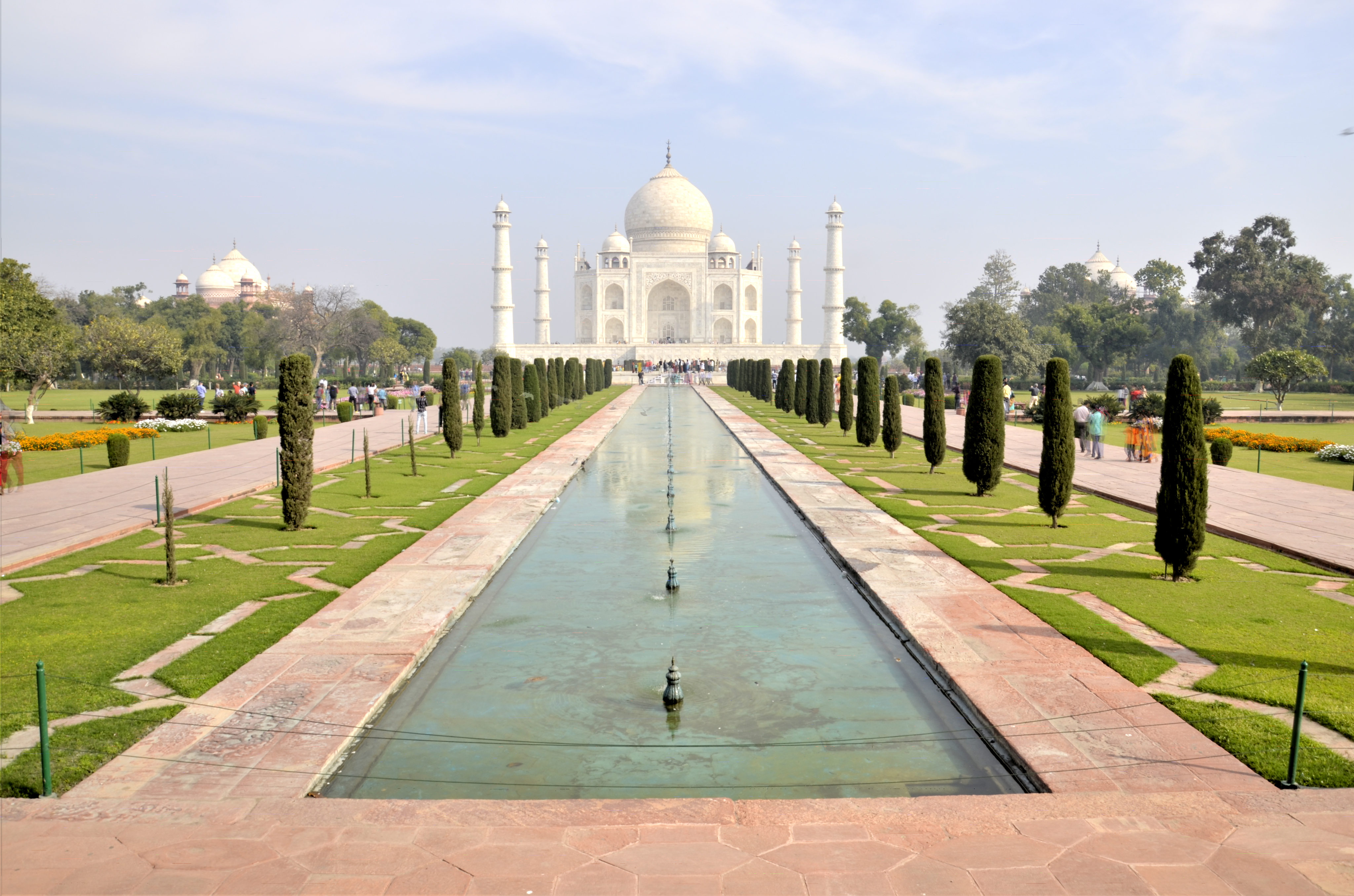 Travelling again by train, we arrived in Agra to views of Agra Fort from the station and, on the taxi ride to the hotel, had glimpses of the iconic Taj Mahal, a place I’ve wanted to visit since seeing my father’s slides of his trip to India when I was a child.

We had booked a hotel right next to the East Gate of the Taj Mahal, but had to walk the last 200m or so with our bags, as cars aren’t allowed in the Gate areas – the East and West gate car parks are each 1km away with only traditional rickshaws and electric vehicles allowed closer in. The exception seems to be in the Taj Ganj area – the small town to the south that was where many of the artisans involved in the construction of the Taj were housed – here the usual mopeds and tuk-tuks noisily jostle for a path through the street chaos.

On arrival, our hotel offered (for a price) upgraded rooms with showers instead of just hot water and buckets. We accepted and moved-in; boys and girls in different rooms – fab – the kids can’t muck round at bedtime for a few nights! At lunchtime we had our first beer of our travels, they haven’t generally been available in the budget places we’ve frequented.

Taj Mahal
We visited the Taj Mahal first thing in the morning with a registered guide that we’d met the day before (‘met’ is a kind word here; as new faces in the area, we were being approached by every vendor, restaurant owner and guide in the street). This one was charging only Rs 300 instead of the advertised foreign tourist rate, on his ID card, of Rs 975 – perhaps his ID was bogus, but we went with him anyway. There were no queues at 6:30am and we walked straight in. The kids couldn’t understand our guide at first due to his accent, but got used to it after a while. He served as a useful photographer for parts our visit as well as showing us around, though he seemed rather fond of our DSLR and I had to ask for it back at one point to get the pictures I wanted.
The Taj Mahal has recently had all domes except the main dome cleaned (using Fowlers mud which is left on for 10 days or so before being washed off – though see this article about concerns cleaning them this way as well as general pollution and river water-level concerns). Only completely traditional methods are used for restoration and cleaning. The main dome still looked pretty white to me and the whole palace was spectacular. The sheer scale of it and the intricacy of the inlaid stone decorations and overall craftmanship is mesmerising (some examples below). It’s a very photogenic place and we have several hundred photographs to help remember the visit, some of them bracketed shots for HDR editing.

The Southern gate and Mosque:

..and a photo with our guide:

Taj Nature Walk
The Taj Nature Walk is massively under-advertised by the authorities. You would be forgiven for thinking that it just a small park area, but the network of paths go a long way into the protected forest area and a number of large grass mounds (some with structures built on top) give great views of the Taj Mahal. The walk takes up much of the green area to the east of the Taj shown in the map below (from openstreetmap).

For entry, we were charged 300 rupees (rather than 400 advertised – it seems we sometimes don’t get charged for both children, even if they are obviously over the minimum age for paying). It was a very hot day and we had a very relaxing time wandering around and relaxing by a lake for a while easily finding shade from the abundance of trees. We also came across a children’s play area with the usual swings, slides and a climbing frame – all in good condition.
Later, we took a traditional rickshaw for the first time back to our hotel – I think it was quite hard work with all four of us on board!

Taj Gardens
The kids are always keen to go to gardens when we are in cities, so on another day we headed to the Taj Gardens so they could run around. None of the tuk tuk drivers seemed to know it under this name though, so it took a bit of explaining and google maps sharing to get us there.

Agra Fort
We walked to Agra Fort from the Taj Gardens, and declined all the guides trying to offer their services. We just wanted to be able to go at our own pace and take photographs as and when we wanted. Not all of it was open to the public, but there was plenty to explore and once again Elliot wanted to take a turn with the DSLR camera. Again, very impressive architecture and stonework and a maze of courtyards. Just a few sample images below:

Paliwal park
We inadvertantly bought ourselves a pedalo ride on a lake here, on account of a bit of confusion on having to pay Rs 140 to get in. We were directed into one of several pedalos and got a ‘guide’ who shared the pedalling with me and Elliot and navigated us around 2 laps of the lake (that you really wouldn’t want to fall into). There were geese, some birds we couldn’t get the names of, and some quite large fish (apologies to any ornithologists or biologists reading this), oh and a few Indian couples lurking in the shadows on benches under the trees enjoying each other’s company – this is a common sight in the parks we’ve been to. As with many places we’ve visited, the whole lake area was well past it’s prime and completely un-maintained – a dilapidated wood-plank and rope bridge into the the main park was cordoned off and used only by dogs as a place to kip.
We gave our guide a small tip (mainly in thanks for not sinking) and headed to the main park that was much better maintained and had a large green open space where Elliot played football with some local lads. A couple of curious students came over (from the university adjacent to the park) and we chatted with them for almost an hour, before heading off for a late lunch.

We later departed on our first overnight train from Agra Cantt station to Umaria, the closest stop to Banhavgarh tiger reserve where we have a couple of safaris booked. The train was delayed by only 40 minutes but had a last minute change of platform – great – lugging all of our stuff up and down a load more steps! It was a very long train, and it took a while to find the right part of the platform to board the carriage we had booked. On board, we had a curtained off compartment to ourselves. We were all pretty knackered and all managed to get some sleep, although the kids, as always, slept far better than we did – it’s not fair!