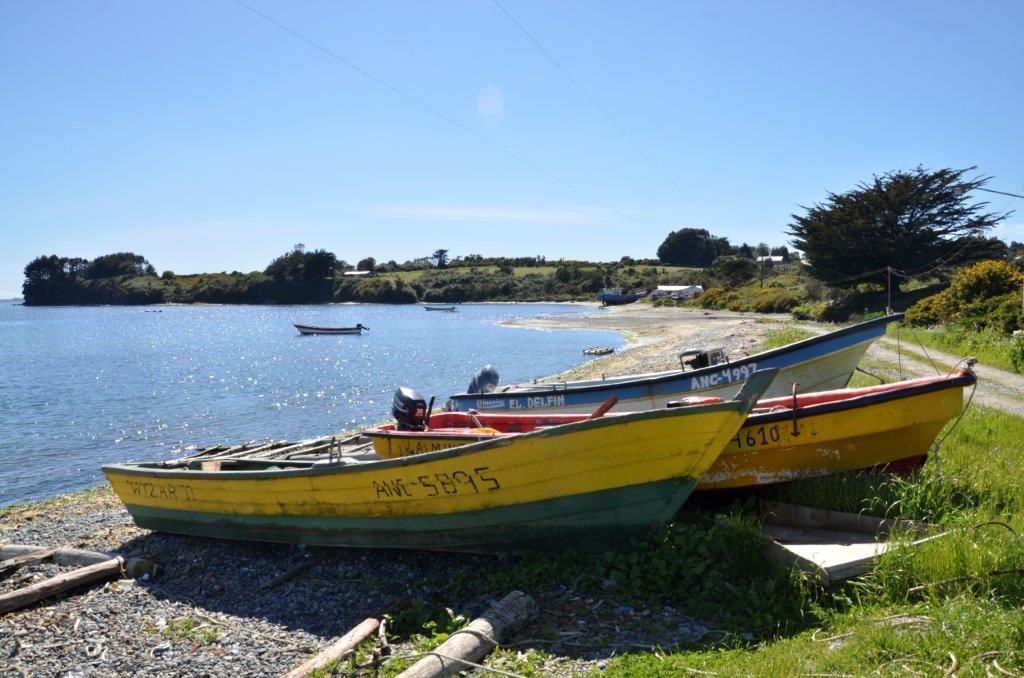 Arriving via overnight bus from Santiago, we stopped for a couple of days in Puerto Varas to have some time to ourselves between workaways (we were due to spend two weeks at a workaway in the north of the island of Chiloé). Puerto Varas is a small town on Lake Llanquihue with beautiful views across the lake of the Osorno and Calbuco volacanoes – we were fortunate with the weather for one day of our stay as the tops of these volcanoes are often in cloud.

We visited the Museo Pablo Fierro… a very quirky artist’s residence (Señor Fierro was there during our visit, busily framing prints). It’s hard to know what to make of this place. It’s an exhibition of his work (both his paintings and the rooms themselves are exhibitions), a shop, a collection of artefacts and curiosities and a work in progress, with some construction work ongoing in one area. Definitely worth a wander around though.

From Puerto Varas, we we took a coach (and ferry; we stayed aboard the coach on the short ferry crossing) to Ancud on the nearby island of Chiloé. We were met at the bus station by our workaway host Carolina. As the workaway location was very rural, our first task was to pick up groceries at the market.

Half an hour from Ancud, we reached our home for the next 2 weeks, up on a hill along half a mile of track, only just navigable with a two-wheel drive. There was another volunteer already there, although he left after a couple of days to continue his travels. Our accommodation here was similar to that we’d had in Casablanca – we had a lovely large 2 bedroom cabin to ourselves including a wood-burning stove for cooking on (and the only source of heat for the property) with as much firewood as we wanted. There was even an electric piano which we were allowed to use.

This is a site where a group of people have bought a huge plot of land (in excess of 20 hectares) and divided it up into plots, retaining a common area which included our cabin (currently for volunteers and visitors) and a second residence of similar size. Ultimately all parties intend to build a house on their section of land – the higher plots have fantastic views on a clear day, with the open ocean on one side and the channel between the island and mainland on the other. In the meantime, Carolina was the only person living there and was managing the site – clearing overgrown areas and maintaining the land, keeping chickens and establishing a vegetable garden. She was also looking after a couple of horses for a friend.

We managed quite a variety of tasks during our stay here –

There were two sitting hens on site – one in the log barn, and one in the old smokehouse. Apparently they’d been sitting for over 15 days, so, all being good, we expected to see some chicks during our stay….This eventually happenned about 4 days before we left, and we all got to see the tiny chick develop – it wasn’t long before the hen took it out into a pretty tough terrain of dry leaves and twigs, the poor thing stumbling it’s way around but just managing to stay upright!

The kids were on dog and cat feeding duty. The cats were nameless but the dog was called Chan, a very excitable spaniel who loved the new attention the kids gave him.

We had a few hours to visit Castro after dropping Carolina at the airport there for a business trip. But the rain put a bit of a dampener on our sightseeing. We managed a wander around including the main square, and down on the front had a tasty and very filling meal where Nick and I had the local dish ‘Curanto’, containing shellfish and meat (Mussels and clams, chicken, smoked pork, sausage) with potato dumplings and a watery sauce. Very filling and tasty!

On a day off we borrowed a vehicle and took a day trip around the northern part of Chiloé taking in a lighthouse, beach and fort, and a trip to see some penguins…

At the lighthouse, Faro Punta Corona, we were at first unsure if you could go inside (it looked like a private residence), but soon saw other people wandering around. Through a small room exhibiting old lighthouse bulbs and radio equipment (some by Marconi) we located and climbed the stairs to the top of the lighthouse for good views around – a little spoilt by multitudes of cables and antennae dotted about the surrounding land.

Playa Ahui, was accessed via a very bumpy road. It was very hot here at this small, sandy beach with excellent views of Ancud and the snow capped Andes in the distance.

The fort, Fuerte Ahui, is a late 18th century fort, acessed via a path next to Playa Ahui. Once inside the main gate, it opens out to a huge well kept walled area, complete with canons and a gunpowder store, and with magnificent views of the surrounds.

On the west side of Chiloé, Islote de Punihuil is a reserve comprising three islands with a lot of birdlife including Cormorants and Penguins (Humboldt and Magellanic). As we drove onto the beach here, we were enthusiastically directed to the first ticket office for boat tours.. We guessed all the other operators were a similar price, so got some tickets here and didn’t have to wait long for our trip. Unfortunately, it was the wrong time of year to see a lot of penguins, but we managed to spot a few on the rocks.

Once our 2 weeks were up, we said goodbye to Carolina and caught a bus to Quellon on the Southern end of Chiloe to catch a ferry to take us to through some of the fjords towards Patagonia.

One thought on “Puerto Varas and Chiloé”