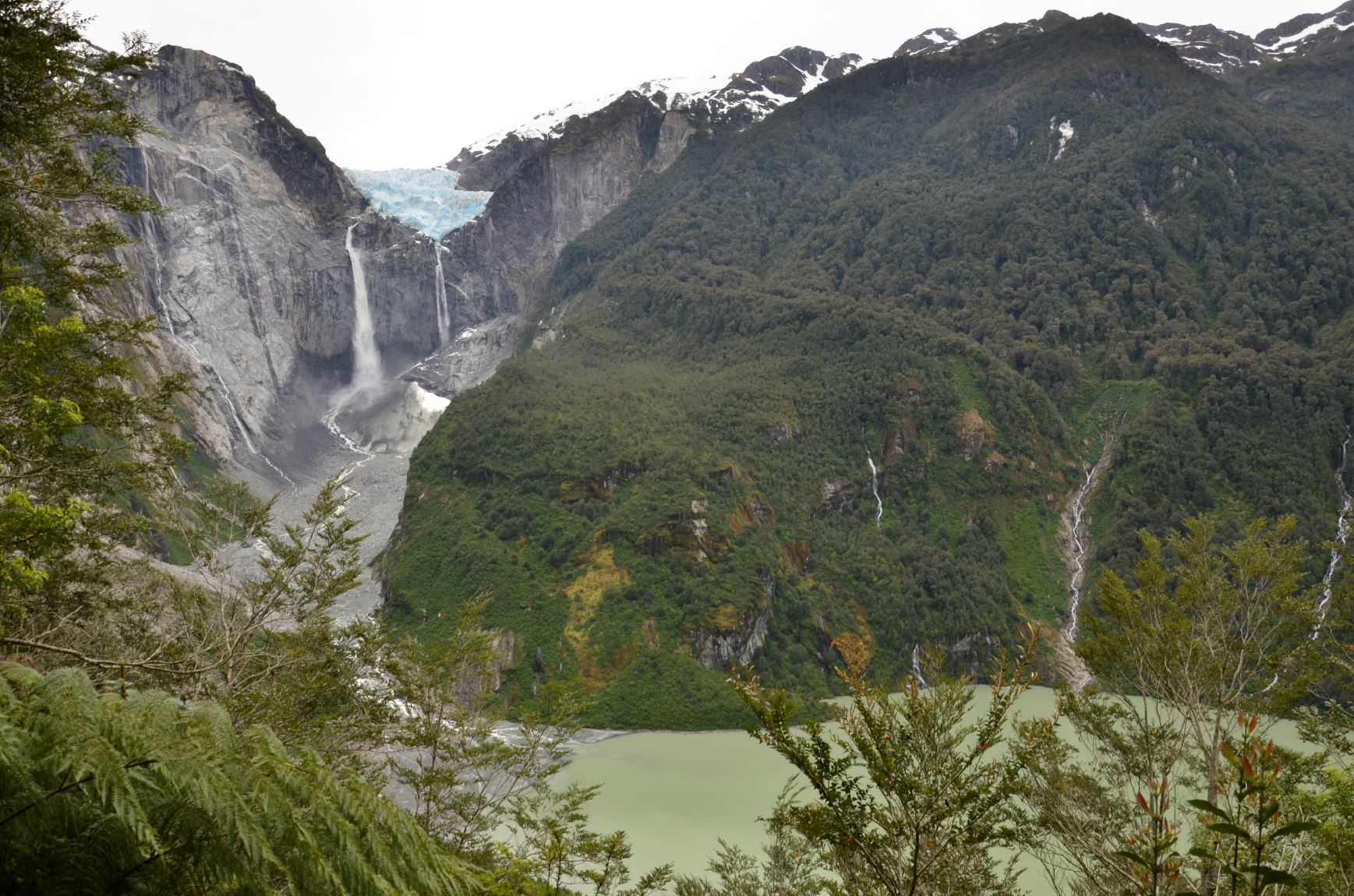 The Carretera Austral is Chile’s Route 7, stretching from Puerto Montt to Villa O’Higgins, over 1200km further south. We hired a car (2 wheel drive – we were advised this would be sufficient, and it was) to take us north along part of it, from Coyhaique to La Junta, and back. The Carretera Austral is popular with cyclists, and we saw evidence of this – on our way back some of them looking pretty soggy and fed up!

The route goes through some spectacular scenery, and for the most part we were very lucky with the weather and were able to stop easily (there was very little traffic) and enjoy the views. We had to make a conscious decision not to stop too much, or we’d never reach our destination!

We had set off fairly early, as we had a long drive on the first day – to get to Puyuhuapi where we had booked a cabaña for a few days so we could explore the Queulat National Park – particularly the Hanging Glacier (Ventisquero Colgante). Leaving Coyhaique we followed the signs for Route 7 out of Coyhaique which turned out to be a bad move, this immediately took us onto a 50km stretch of gravel road which although shorter than the alternative, turned out to take far longer than the paved road via Puerto Aysen, partly as we kept our speed down to reduce the likelihood of chipping the pristine paintwork on our vehicle. The gravel was pretty deep in places, either it had been resurfaced lately, or not many people us it – or both! We met very little traffic on this stretch.

Our breakfast stop was at Villa Maniguales. Here we found a minimarket with empanadas and some supplies for lunch, and a small park full of wooden play structures.

We found a beautiful lake to stop by for lunch – very still, with reflections of the mountains in the lake.

A viewpoint and a couple of waterfalls later (Salto El Condor and Sendero Padre Garcia, the latter providing some rest after a dizzying set of hairpin bends) we joined the Rio Quelat and drove alongside it, getting our first glimpses of the Hanging Glacier from the road.

We set out quite early to get to the Hanging Glacier before all the day trippers from Coyhaique. We paid our park entrance fee, and parked up. We first went to the viewpoint near the carpark, then set off on the uphill walk (4.5 mile round trip) to the viewpoint. Whilst there we both saw and heard some ice falls from the front edge of the glacier – these sounded like thunder as they crashed into the rocks below, amplified by the natural ampitheatre of the gorge.

From Puyuhuapi we headed about 30km north to La Junta and took a drive around, with plenty of stops to appreciate the views. Our plan for a circular route was foiled when meeting a very narrow and rickety wooden-surfaced suspension bridge, which we didn’t feel comfortable taking our brand new hire car over – there were just inches spare on either side and we didn’t know what the road would be like once across. So we decided to backtrack instead.

Back in La Junta, we found a cabaña for the night by asking in shops and places with boards outside. It took 3 or 4 attempts before we found one that was available. As soon as we were in, the rain started. We got the log burner going to warm the place and made use of the well equipped kitchen. The rain intensified and set in for the night, continuing for most of our drive back to Coyhaique the following day. The road around the lake south of Puyuhaupi had a lot of small rockfalls (and a lot of huge pot-holes) on our first couple of passes of it, on the way to the hanging glacier. The road has steep loose rocky sides and it’s best not to think what could come down as you drive past… as we drove this section going south for the last time, half of the road was closed off due to a huge boulder that had come down – presumably a result of the heavy rain.

We took a slightly different route back to Coyhaique, diverting off route 7 onto the X-50 and then route 240, before rejoining it further south. We had arranged with the car hire company to drop the car at Balmaceda airport (at no extra cost!), on the way experiencing a snow blizzard on some of the higher ground.

We then flew down to Punta Arenas to continue exploring southern Chile.

One thought on “Carretera Austral – Coyhaique to La Junta”