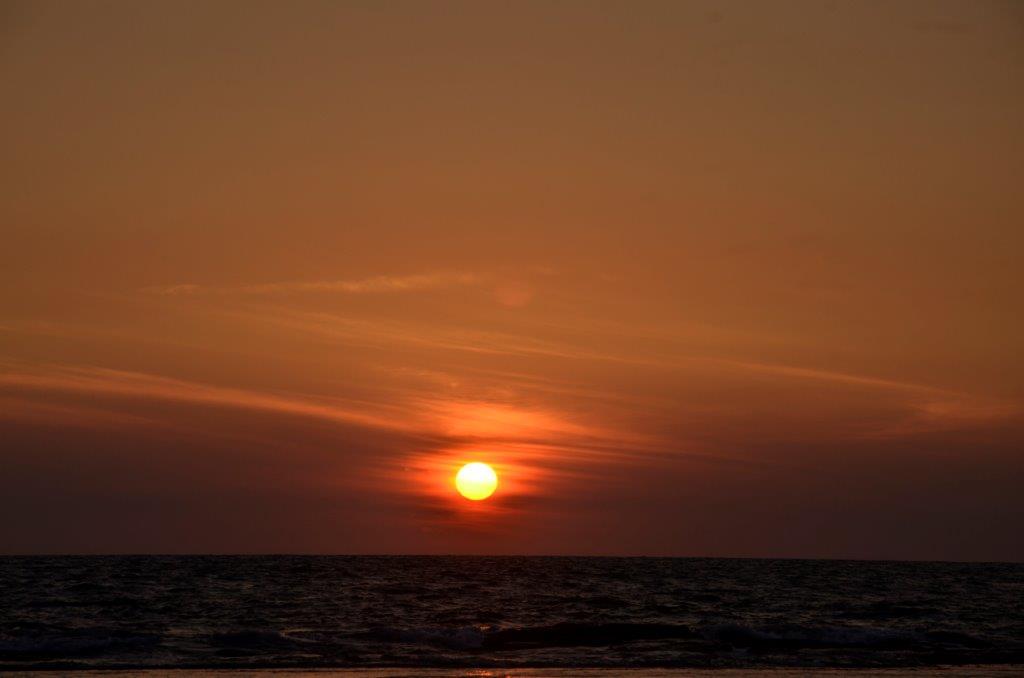 Our time in Sri Lanka started at the beginning of April. We arrived into Colombo (Bandaranaike International Airport) on  a flight from Bangalore (Bengaluru) and booked 3 nights in a homestay in Negombo about a 20 minute drive north.

Our homestay was just off Lewis Place – the main coastal road in Negombo. We had an upstairs room (plus the luxury of a shared kitchen and dining area just for guests) in a house opposite a large Catholic church and only 200m from Negombo beach. We had no plans here other than to relax for a couple of days and get our bearings.

The 12km journey from Columbo Airport to Negombo presented us with an immediate comparison with the poverty-stricken streets of places we’d seen in India, giving the impression of a slightly more developed country with tidier looking buildings and shops, and cleaner (and quieter) streets. We were going to get an Uber cab, but issues with our account meant that we took a local taxi – saving about 50% of the initial cost after hard bartering and walking away from the taxi rank! We later learned from our host that Uber is not at all welcomed here and that there have been altercations with local taxi drivers – apparently rolling an Uber cab containing passengers, athough we can’t validate this.

The beachside streets of Negombo are littered with small stores, taxi and travel services and tourist restaurants advertising mainly seafood dishes – We tried You and Me Seafood based on online reviews and were not disappointed. We also had a beer each – the first in over a week as Hampi had been a dry town. Another evening we cooked our own spaghetti with a tomato sauce and chicken meatballs – it wasn’t easy to source the ingredients for this in the local shops!

The waves on the main beach in Negombo can be big – we played in the waves for a short while, but they were too much for the kids – a rogue one occasionally knocking us all off our feet. The beach was empty, save about 6 other (very) white tourists, and the sun bearing down on us limited our stay as there was no shade. A few beach vendors approached us, but there was no hard sell like there had been in Goa, India. The following afternoon, on a recommendation from our host, we took a tuk-tuk about 4km to a much smaller and quieter beach (Morawala Beach). This small beach is protected from the waves by an artificial bar that juts out into the sea, allowing the kids to swim around safely – well worth the trip. Here we watched the local kids (and a large group of chinese tourists) playing in the water, chatted with a local lad who recommended his parents nearby restaurant ‘Limoncello’ (we didn’t go), and stayed to watch the sun go down over the sea, enjoying the cooler evening air.

We decided to do the well advertised boat trip to the lagoon in Negombo. You can barely walk 50m down the street without seeing these trips advertised. They generally start in the Hamilton canal, originally built by the Dutch, and are either offered by reputable companies with up to date boats and safety gear, or as in our case, a couple of lads in an old boat with a stutterring outboard a 2 lifejackets to share between the 6 of us. To be fair, they pointed out wildlife, and navigated the canal and lagoon expertly. Where we started our trip the water in the canal was filthy and stagnant (all the local ‘grey’ water drains into it – hopefully nothing else!), but this improved the closer we got to the lagoon. The absence of rain for the last 3 months hasn’t helped at all. The canal is lined with small boats and fisherman sorting out and repairing their nets following the mornings activities. There is plenty of bird life along the canal and in the lagoon itself – we spotted Egrets, Grey herons and Kingfishers. The lagoon is very shallow in places and the kids enjoyed swimming in water that was only about a foot deep and found (terrorised) a hermit crab hiding in its shell. There were a few shipwrecks around – reminders of the boxing-day tsunami of 2004 which devestated many coastal communities in Sri Lanka.

For the next leg of our journey, we needed transport to Sigiriya, further inland and the home of Lion Rock, a UNESCO heritage site. Ignoring the overpriced taxi offerings from comanies along the main road, we got a good price with an internet taxi company. It was a 4 hour journey, but it passed quickly and was very comfortable with the AC keeping us cool. The roads were busy around the towns, and our driver got pulled over by the police at one stage for overtaking on a hill. This seemed like a lengthy exchange, but he said all was OK – his driving was a bit more careful after this!

One thought on “Negombo”