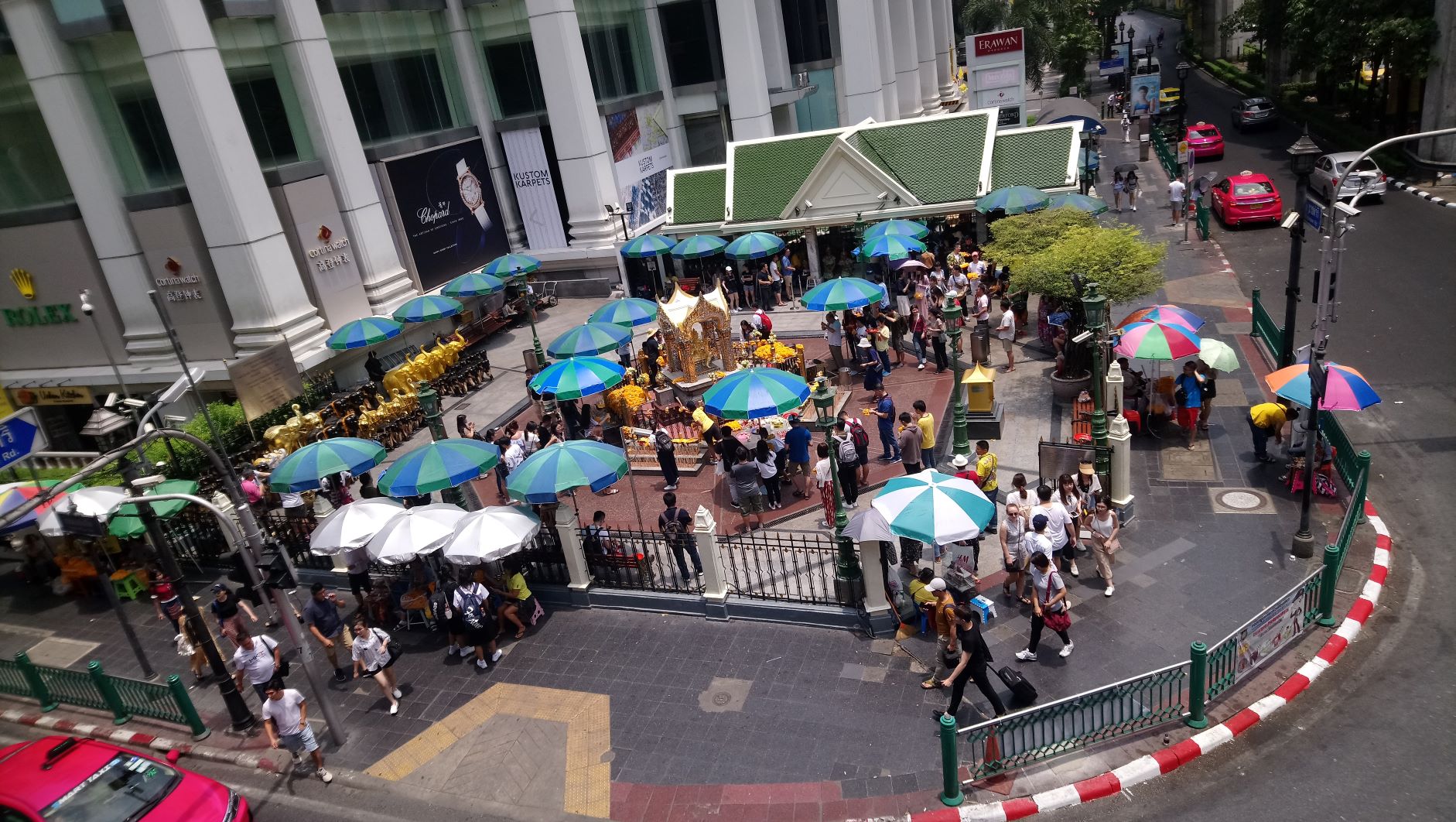 We didn’t have the smoothest start to our stay in Thailand. On arrival at our first hotel (about 9pm) a sign on the door said it was shut for refurbishment – we’d reserved it through Agoda who clearly had no idea that it was shut for business! Not impressed. Fortunately our taxi driver was very helpful, giving us a mobile hotspot so that we could find an alternative place to stay. We found one nearby within a few minutes and he dropped us there (we had prepaid the taxi by credit card and had no local money to give him). It turned out to be very nice – an old cinema converted into a modern dormitory (Prince Heritage Stay). However, it was a bit more expensive than we wanted so we just stayed the one night and moved somewhere cheaper for the remainder of our stay.

Elliot was given chopsticks at breakfast on our first morning (to eat Pork noodle soup), this didn’t faze him and he gave it a go and enjoyed it.

We did a bit of sightseeing at the very impressive Wat Arun Ratchawararam (The Temple of Dawn) getting there by river ferry. This temple was very reasonably priced at 50 Baht each (with just 3 of us needing to pay).

After crossing the river we saw the outskirts of the royal palace – the coronation of Thailand’s King Rama X was happening the following day with celebrations lasting for 3 days. So the city was decorated in yellow and white ribbons with pictures of him everywhere.

We walked back to our room that evening via the flower market, which was still busy even late into the evening no doubt as a result of coronation preparations.

Bangkok was exceptionally hot, and this caused much grumpiness from Elliot. We even bought a couple of UV blocking umbrellas for extra protection from the sun whilst walking around – the locals used these too. To escape the heat, we spent quite a bit of time in air conditioned shopping centres (with the national anthem piped through the speakers on a never ending loop) in search of the toy shops which always had an area where kids could play lego – a definite hit! These malls all seem to have food courts at or below the ground level providing a huge choice of cheaply priced local food.

The air-conditioned SkyTrain was also a welcome relief from the heat, so the kids wanted to use this wherever possible. It was an added bonus that on the Sunday of the coronation celebrations that the SkyTrain was free to encourage people off the roads and onto public transport.

We returned to the palace area on the day of the coronation and saw (and felt) an array of cannons firing in the park (painfully loud when we were briefly downwind of them). We also hung around in the blistering heat to watch a variety of parading soldiers. They must have been suffering themselves!

Later we caught the river ferry back to IconSiam, a huge shopping centre, as we knew this would be air conditioned and Elliot was once again struggling with the heat. We finished our visit by watching the multimedia fountain show there – probably more impressive in the dark when lit up.

We have numerous pictures of the power cables in Thailand as Nick never failed to be astounded at the mess!

We left Bangkok on the overnight train to Chiang Mai. Although the train was newer than the ones we had been on to date, the lights were not dimmed overnight, and the air conditioning was pretty cold. Not a good night’s sleep for the adults!