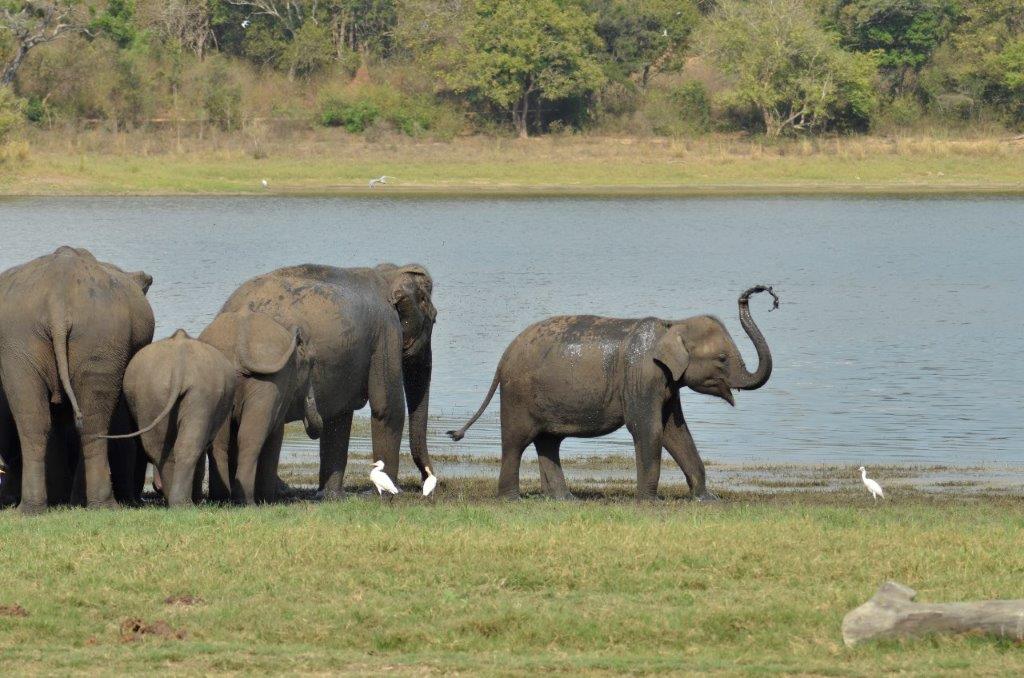 A short tuk tuk ride from Sigiriya, our stay in Habarana was a short stop to access Minneriya National Park, home to herds of wild elephants (though we could have done this from Sigiriya). We did an afternoon jeep safari here and the elephants did not fail to impress. Due to the lack of rain recently, family groups of elephants were by the huge lake, eating, drinking and bathing. There was little else in the park though – a few Buffalo, Peacocks, Chickens, Egrets and Sea Eagles. More tourists than animals in fact – but it was worth it. These safaris can be expensive (example of Minneriya safari price here) but we got a good price of US$100 total through our host (who matched a quote we got from a local agent over the phone) and had a jeep to ourselves. There seems no need to pre-book these safaris – using a local agent is probably the cheapest way to go if you are on a tight budget.

We also spent Sinhal and Tamil New Year here (13th/14th April), which resulted in restaurants and shops closing early or being closed for a day or two. So we had a relaxing time catching up on laundry, blogging (we had some decent WiFi) and a bit of homeschooling. Our host kindly brought us some traditional New Year sweets – all very sugary and tasty, and the president sent through a text message to everyone..

The following morning, arriving by tuk-tuk with less than a minute to spare (the train arrived as we unloaded our bags) we caught our first train in Sri Lanka from here to go to Polonnaruwa. We travelled third class, paying a few rupees more than necessary as the ticket office had no change – though it still only cost £1.50 or so for the journey – for all of us.

The train was ancient as were the tracks – it was a bit like being on a boat with violent jerks thrown in, but one ceiling fan in our carriage worked and with the windows (& doors) open, there was a good draught! Our ‘train’ of 4 carriages was abandoned for over 50 minutes at one station, as the engine decoupled and eventually pulled up beside us! Another engine turned up and after a violent coupling, we were in business again…

One thought on “Habarana”