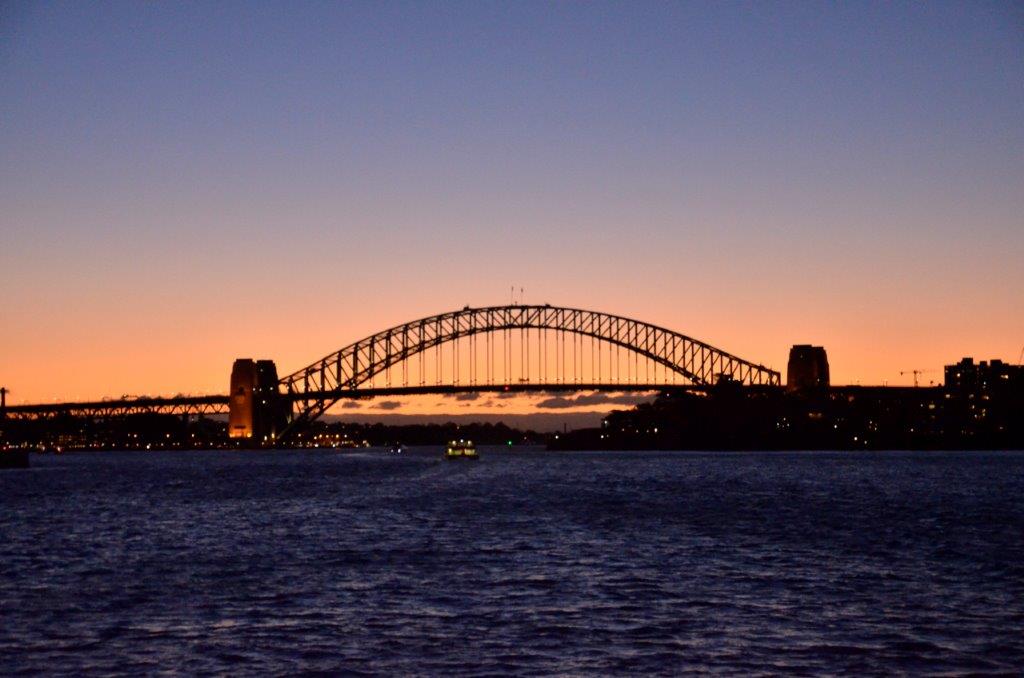 As we drove closer to Sydney we said goodbye to the nice quiet roads that we’d travelled since picking up our motorhome. We decided, against the wrath of google navigation, to drive over Sydney Harbour Bridge (well, Nick did, saying it was something he just wanted to do!). Despite this causing a longer and frustrating detour through busy streets, we dropped off the motorhome without any problem and more or less on time. The staff there were happy with the condition of the vehicle and we were very relieved to know that we would get the substantial bond back!

From outside the motorhome depot we caught a bus to the nearest metro station to enable us to get to our hostel in the Kings Cross area of Sydney.

Our sightseeing in Sydney incorporated a visit to the very impressive Gothic Style St Marys Cathedral (only fully completed in 2000) and Archibald’s fountain in Hyde Park which had a couple of buskers playing in the sunshine.

After walking to the harbour area for our first proper view of the iconic Sydney Opera House we decided to walk over Sydney Harbour Bridge and found a park on the other side of the river providing the opportunity to relax for a while and for the kids to do some sketching.

The Powerhouse museum in Sydney had an Apollo 11 exhibition on, so we went to take a look. It was much bigger than we anticipated and we could have spent all day there, but had arranged to meet a friend of Nick’s in the afternoon, so didn’t get to fully appreciate some areas. After meeting up, we enjoyed a drink and some snacks in the Potting Shed and a wander around the very pleasant Sydney Park.

Carefully monitoring the weather forecast, we took a day trip by train to the Blue Mountains. We had been warned about how cold it can be there, so went prepared with suitable clothing, but it was a beautiful day and not at all cold. We did a lovely walk from the train station in Katoomba, taking in the Three Sisters, Katoomba Falls, Leura Forest, Leura Cascades and finishing up at Leura station. It was longer than planned and included hundreds of steps down and up (and then down, and up again), but it was enjoyed by all with only a little whingeing from our youngest. We were pleased in hindsight not to have done an expensive tour or hop on hop off bus.

With Nick’s friend, and her son, we took the 30 minute ferry from Sydney to Manly where we stopped for a pub-meal before walking along the front to a bar in Shelley Beach where we bought hot chocolates for the kids, and beers for the adults. Although it was windy the beach was busy and it was nice to get away from the hustle and bustle of the city.

Nick’s friend kindly offered to babysit one evening, so we accepted (the kids were so excited about a sleep-over) and managed an adult evening out to see West Side Story in the Opera House. Neither of us had seen this musical before, and it was an excellent show.

From Sydney we said goodbye to Austrailia as we took a flight to Auckland, New Zealand.