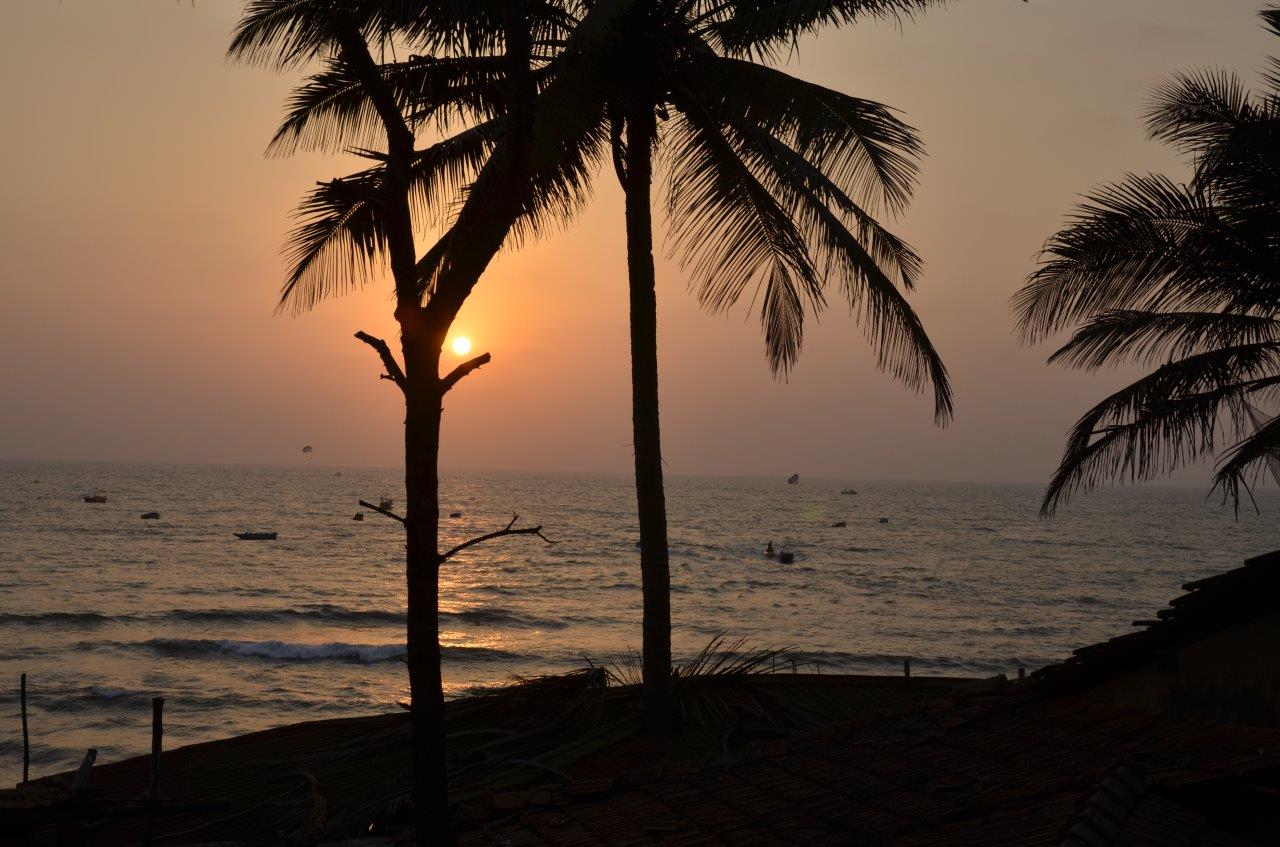 The train journey
We had an eventful train journey to Thivim. It was a daytime journey – from about 8.30am til 6.45pm and we travelled in class 3AC, which seemed to be where the middle class Indian families travelled. There were a lot of them heading down to Goa for a short break as it was the Holi Festival and they had time off work and school. We got on the train to discover that our seats were already occupied, and the family who had taken them wanted us to exchange with them so they could stay sitting with the rest of their friends. So we moved further down the carriage to our new seats – this is pretty common practice but we had to call upon this chap a couple of times over the course of the journey to help explain to the conductor and other passengers which seats were ours. At times these were lengthy exchanges but we managed to stay put.

Our new seats were with two families each with two children aged 10 and 4 and we spent quite a bit of the journey chatting with them about jobs, holiday costs, Goa in general and our travel plans. Their destination in Goa was a resort with a pool (not booked in advance – apparently there’s so much accommodation, you can always find something) and we got the impression that they were going to be drinking/partying a fair bit (they had a list of whiskeys to try recommended by a family friend from the UK). Having been a couple of times previously, they recommended some beaches and waterfalls for us to visit.

They had never travelled outside of India, but when there is so much of your own country to explore, why would you need to leave? They seemed to think Elliot looked like Harry Potter, and kept calling him ‘Potter’.

In general these Indian trains are very sociable with people chatting with neighbours, eating and having a good laugh. People regularly get off at stops to buy snacks and stretch their legs, jumping back on when the train starts moving (no automatic doors on these trains – quite often they are left wide open during the journey so we accompany the kids to the loo on occasion).

In addition to train staff taking lunch orders a couple of hours in advance, tea and coffee vendors regularly walk down the aisles carrying large stainless steel urns chanting “Chai, Chai, Masala Chai, Garam Chai” in a continuous, but not unpleasant, monotone. Note that this starts at around 6am, so going to sleep early on is essential. These sweet milky teas are served in very small paper cups (about double espresso size) and cost only 10 Rupees. If only they came down the aisles selling food and drink on trains in the UK at reasonable prices… sigh… OK Indian trains are old, a little grubby and bone-shakers at times, but they keep them going with working A/C, LED lighting in places – even loo roll in the western toilets.

Anyway, apologies for the extended dialogue on trains! Here’s the main post…

Anjuna
We alighted at Thivim at dusk with what seemed like several hundred other passengers but easily found a tuk-tuk and somehow fitted all of our bags in the back or on the roof. I had to sit in the front which involved leaning away from the driver with half a bum-cheek on his seat and hanging onto bits of the vehicle with both hands. With the fast setting Indian sun it was dark by the time we arrived at our beach-side accommodation. The tuk-tuk drivers are very skilled and observant drivers with a sixth sense for invisible speed bumps (of which there are many), wandering cows and dogs sleeping on the edges of roads.

We had to walk the last bit of the journey as the road narrowed into a network of paths that even a tuk-tuk couldn’t navigate. Fortunately our host was out to meet us, as we had warned him we were on our way. We were staying here for a week, and were looking forward to having some time to relax, and stay in one place for a bit longer.

The room wasn’t quite as we expected – it was spacious with 2 double beds and a 3-piece sofa around a table and with a decent view of the sea as per the photos, but was also billed as having a kitchen “in which you could knock up a hearty meal“. This turned out to be a room containing a spare mattress, some worktop and a sink. On questioning this, we were told we could have an induction hob and a few utensils or alternatively we welcome to use the hotel kitchen if we wanted to cook (they only use it for breakfasts – and we found out why later in the week…).

The room was booked through AirBnB and advertised as a homestay so we were also expecting it to be in/attached to someone’s home – this was not the case, it was an annexe owned by a small hotel. There was also loud music being played by the beach shacks (the closest of which was just below the windows of our room). Fortunately this stopped every evening at 10pm and it wasn’t annoying music – mostly chill-out beats. Even so, we did our enjoy our time here and a large outside area meant that we finally had a chance to get a line up and hand-wash a load of laundry instead of paying for it to be done.

Air-Conditioning tip: The AC in our room started off being very good but after a couple of days was struggling to cool the room. We lifted up the front cover and found 2 filters that were completely clogged with dust. We removed these (they just pull-out) and blasted them clean using the bum-washing jet in the bathroom. A quick shake and re-installation and the AC was good again – we have since done this in 3 of the rooms we’ve stayed in and it’s been very effective.

We got out to explore the following morning after breakfast – a really good one of omelettes, jam, toast, fruit and chai provided by the hotel. The kids even decided they liked chai (a small cup contains about 2 teaspoons of sugar), and drank it every morning during our stay here!

As planned, we are spending our week here relaxing. The beach is a very short walk away and beautiful; lovely sand, and the sea warm enough to just walk into. Swimming is frowned upon by the lifeguards as the waves are quite rough, and further out there is sharp volcanic rock, but you can go in quite a way before it gets deep, and play around in the waves. The kids are getting used to standing their ground and love it when a huge ‘Epic’ wave literally knocks them off their feet (and their goggles off their faces).

Quite large patches of the rock come onto the beach, and occasionally there are ‘No selfie zone’ signs to stop people getting swept off their feet whilst capturing their good looks with the scenic backdrop:

The beachside area, between the tarmacked Flea Market Road and the sea, is a mix of original poorly maintained Portuguese properties including a small church (the main religion in Goa is Catholicism), modern concrete dwellings and small hotels (not more than about 2 storeys high) and along the beach, shacks of various sizes constructed mostly from wood and bamboo (the bamboo here is used for scaffolding and is extremely study stuff). All of this nestled amongst coconut palms makes for a very pleasant environment, and it is much hotter here (28degC overnight and up to 35degC in the day); we often spend the hottest part of the day in our AC room and try to get some home-schooling done.

For Jessica’s birthday we took a taxi to Ozran (or Little Vagator) beach just a couple of miles to the north and later in the day walked over to Vagator beach. These beaches are much quieter and much wider with nicer sand and a gentler slope into the sea. We had a really nice lunch at a beach shack – some of the best chicken tikka we have had in India, prawn curry and the birthday girl had a massive mixed fruit pancake, which looked and tasted amazing.

We didn’t make it to Chapora fort up on the hill from Vagator beach as it was due to shut by the time we thought about it (and we’d had enough of forts for a while).

We found a supermarket, which was well stocked, and allowed us to do some of our own catering and try plenty of Indian style snacks. We did venture to the hotel kitchen, which was an experience. It is a dirty storage room with a fridge, gas bottle (and accompanying smell of gas), three ringed hob, and a tap outside for washing pots. There was no tin-opener in sight which caused us a bit of bother, as one of our tins didn’t have a ring pull – but a sturdy knife stabbed into the top and worked around the edge soon got the job done!

The kids have loved being here, and wanted to be in the sea as much as possible or building sandforts, and are getting used to the routine of getting covered in sun cream before going out. There are a few other families around and both Indian and foreign tourists. We still seemed to attract a fair bit of attention and requests for selfies. You can’t sit on the beach for long before being hassled to ‘See my small shop?’ by the ladies (and occasionally men) offering jewellery, henna tattoos and pedicures along the beach. The jewellery is complete tat and an ankle bracelet Dawn bought tarnished within a few days, but it had cost only £2 after some bartering (probably double what we should’ve paid).
It seems that only the foreigners bother with a swimsuit (which is acceptable attire in Goa) – the Indians go in the sea fully clothed, or in underpants.

Our next destination was Varca, in South Goa, this was a couple of hours in a taxi on Route 66 (well, the NH66). The local roads towards the end of the journey, combined with driving technique, resulted in both kids feeling travel sick in the car and we had to stop for Jessica at one point. There are vast new roads under construction along much of this route both at ground level and a raised highway. It’s going to look very different in 2020!