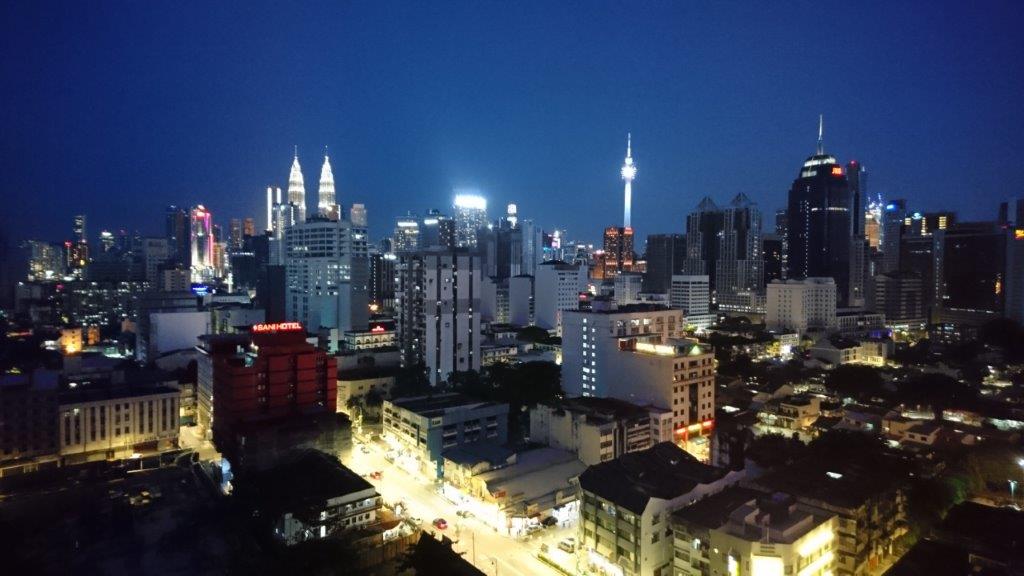 We arrived in Kuala Lumpur by bus from Tanah Rata, the first part of the journey leaving the Cameron Highlands on very windy roads. There were several trees down following a storm, and at one point we got completely stuck as trees were down across the road. We had to wait almost an hour for first a highway patrol and, later, the fire service to attend with chainsaws. The chain-sawing operation was hindered by biting ants which fell out of the tree onto the guys working below. Those not needing to be involved kept well clear..

In Kuala Lumpur we were in a fabulous location in an Airbnb apartment on the 16th floor of a towerblock, two minutes from a metro stop and Sunway Putra shopping mall (which included a cinema). We had mixed weather, some of the time overcast, which was nice as this kept the temperature down. We also experienced a few thunderstorms, mostly late afternoon or evening, but had one day with rain and storms all day which brought the level in the nearby storm drain to just above the path level – it had been well over a metre below this beforehand. We could see the Petronas Towers and KL Tower from our apartment. These looked particularly impressive when lit up at night.

We took the metro to the Petrosains Discovery Centre in the Petronas Towers. The kids really enjoyed this and got stuck into all the exhibits; we ended up staying for about 6 hours! From dinosaurs to space to electronics and physics and, not surprisingly, oil extraction and fuels. Afterwards, we had a brief look at the towers from street-level – it is hard to get far enough away to take a photo – sellers of mobile-phone clip-on wide angle lenses are in abundance here hoping for a sale.

The cinema in the nearby Sunway Mall was cheap (£6 for all of us), so we went and enjoyed a morning viewing of the Secret Life of Pets 2.

We got ourselves up and out early one day to visit the Batu Caves, but on arriving at the metro station it was only after we bought our tickets that we discovered there was a 53 minute wait for the next train. So we changed plans and took a Grab taxi so that we could make the most of the cooler morning as planned. We arrived before it was busy and climbed the colourful steps up to the caves. There was a huge gold statue at the bottom of the steps. The caves were large and very impressive with the stalagmites and stalactites. A cheeky monkey helped itself to one of our water bottles on the way down.

There is a canopy walkway in Kuala Lumpur’s free to enter EcoPark which was quite pleasant, despite the heat and humidity, and gave a different view of the trees. But after the canopy walk, to get across the rest of the park to a metro station, we had to walk along a mosquito infested path for about a kilometre, which was not enjoyed even though we had insect repellent on! As soon as we were out of the park, the kids went into a mall just for the air conditioning taking the escalators up and down a couple of times to cool off.

Just outside the Petronas Towers is KLCC park with a fabulous children’s playground and water park. We arrived late afternoon and the kids enjoyed both of these until we were kicked out of the waterpark by security guards blowing whistles and waving their arms around at about 5.20pm (it was supposed to be open until 7pm). We went to eat at an Indian restaurant (discovering air-conditioned above-street walkways along the way) and returned to the park just before 8pm to catch the water fountain show – colourful lights and fountains to music.

Another hot day meant we left it until late afternoon to visit the Botanical gardens. We had a lot of problems finding these from the KL Sentral metro station; two thumping great hotels were in the way blocking pedestrian access. It turned out you had to go through to another underground metro station (paying a small amount to be allowed through the barriers) and out the other side in order to get to the National Museum and then to the gardens. The maps don’t take account of the fact you cannot get down to street level and cross roads. There were walkways above the roads which is good, but you need to know where they go. We got there eventually and the kids got a change to run around and play for a while. We were all too hot and exhausted to explore the gardens fully – we chatted briefly with a guy from Dubai who was used to temperatures over 40degC but not the 85% humidity. Even he was struggling with the heat here!

From Kuala Lumpur we took a flight to Siem Reap, Cambodia, to stay for one week to see the Angkor Wat Temples.