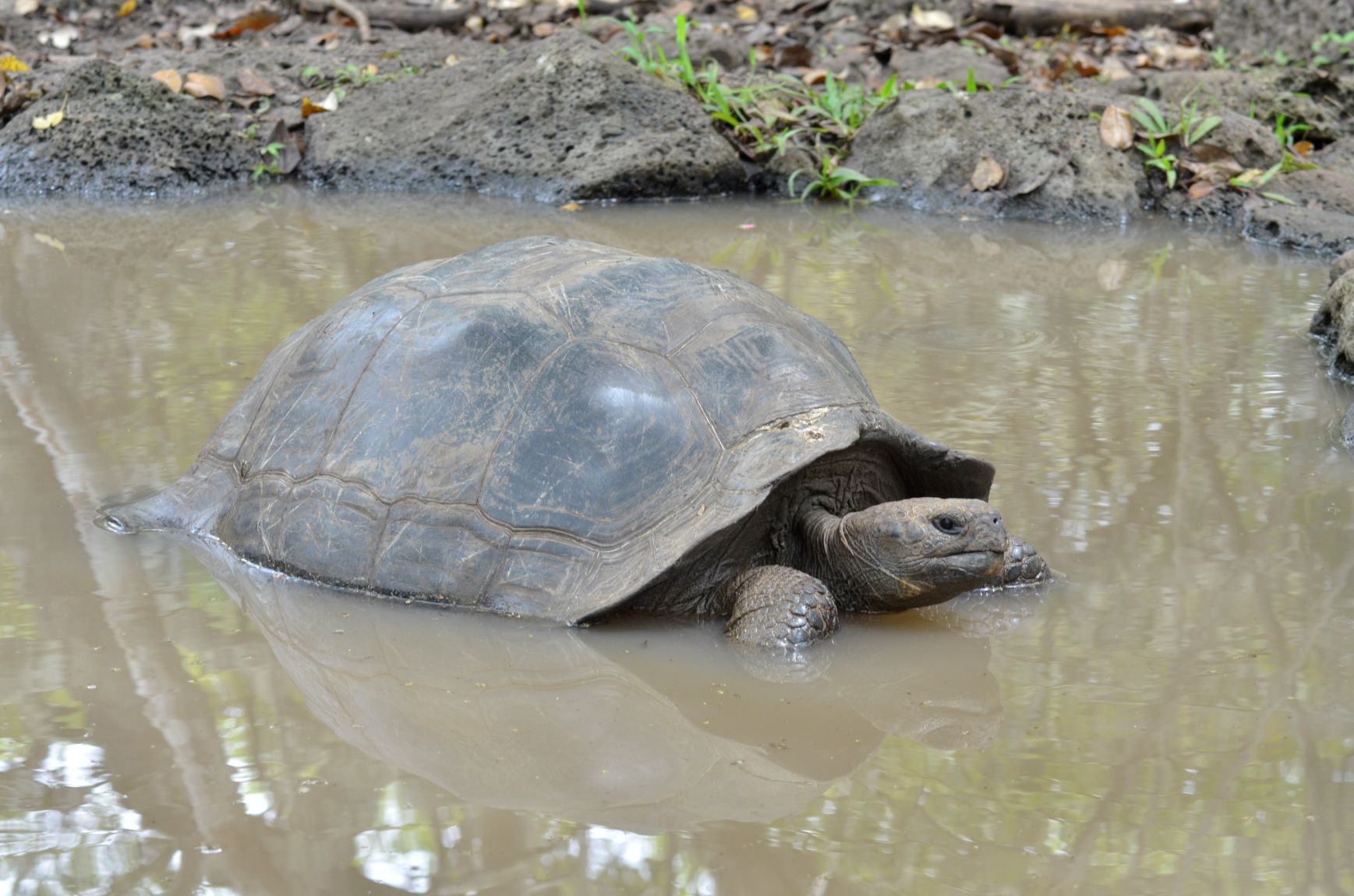 From Santa Cruz we took a day trip south to the nearby island of Floreana. We were in a group of 10 tourists plus our guide, Miguel. The boat journey to Floreana was about an hour and a half. To minimise the motion of these inter-island boats as they slam through the waves, you need to sit at the back, but unfortunately this is where the outboard motors are, so it’s a trade-off between bumps and shade (and potential sea-sickness) or noise/smell and sun.

On Floreana we were greeted by sea lions lying around at the jetty (a much smaller affair than at Puerto Ayora) and a converted truck which could seat about 16 people in a covered area behind the cab on wooden bench seats. It was quite a bone-shaker, but we weren’t going far on this small island (fortunately).

We climbed aboard the truck and this took us up into the hills where we walked for about an hour taking in caves, giant tortoises, a labyrinth and large rock-carved face (both of unknown age and origin), and the fresh water source for the island (the only Galapagos island to have one). During the walk we got some amazing views over the whole of the island, and being up in the hills it was refreshingly cool. Our guide provided us with an interesting history of Floreana, the first Galapagos island to have settlers, and some of the history of the Galapagos in general.

After a tasty lunch at the only restaurant in town, we snorkelled from a beach of black lava rock, watched sea lions and swam with giant turtles. An incredible experience!

Our next destination from Santa Cruz was to go and stay in Puerto Villamil, on the island of Isabela, the largest of the Galapagos islands, and a two hour journey on a similar boat to the one that had taken us to Floreana. Prior to boarding, we had to go through a biosecurity check (to ensure we weren’t taking any organic matter off the island). On arrival we had to pay a port tax ($80 for all of us) and took a cab to our accommodation. There was a bit of a mix up with the room we had booked, but eventually we were given one which had enough beds, and were not charged any extra. We were about 10 metres from the beach and a small bar.

During our short stay on Isabela we pretty much had the huge, empty beach to ourselves. We followed the ‘Flamingo Estuary’ boardwalk which takes you past a few salty lakes and we saw a few flamingos here before continuing along the path to the tortoise breeding centre (Centro de Crianza Arnaldo Tupiza), an impressively large site with plenty of giant tortoises roaming the grounds and a huge breeding program underway with enclosures housing tortoises of various ages. We snorkelled at Concha Perla, a sea water lagoon near the port, reached via a path/boardwalk through mangrove forest.

We also hired bikes to explore the tracks at the end of the beach. These provide access to a few smaller beaches, salt lakes, a section of collapsed lava tunnel, and quite a bit further on, the Wall of Tears (Muro de las Lagrimas), a wall built by a penal colony for no other reason than to make them work. It’s a 5km ride from the ranger-station and steadily uphill on the way… We got there eventually, taking care to ration our completely inadequate supply of drinking water (oops!) – it was scorching weather. Only when you got above the wall and looked down on it could you appreciate how thick it was and how much stone it contained – it’s 100m long and over 10m high. It must have been an incredibly difficult and dangerous undertaking for the prisoners building the wall, many of whom died, hence the name.

It was on the return journey that Jessica fell off her bike on a downhill section. It was a bad fall and left her very shaken and grazed in several places. We had to get back in order to catch our ferry, so Jessica had to ride on Nick’s bike (with Nick) whilst I rode mine and wheeled her bike back to the ranger station. We did spot some tortoises by the path, but otherwise were in a hurry. The ranger cleaned up her wounds and called us a taxi. We had to quickly return our bikes, collect our luggage and get to the port, fortunately Puerto Villamil is a very small place!

The boat from Isabela back to Santa Cruz was not as busy as those we had been on previously (maybe because it was an afternoon sailing), and it made for a more pleasant journey to have some space. We even saw some dolphins in the wake of the boat and the kids managed to sleep a little.

We’d had trouble booking ferry tickets to leave Isabela, and ended up on the afternoon ferry back to Santa Cruz. If we’d got the morning ferry as originally planned we would have been able to travel on to San Cristobal. But instead, we had to stay overnight in Puerto Ayora before getting a ferry the next morning to San Cristobal. This was another two hour boat journey and we were all pleased it would be our last as we were due to fly out of San Cristobal back to mainland Ecuador.

A short walk from our accommodation, Playa Mann beach on San Cristobal had some much needed shade, and the sealions were playing in the waves breaking on the beach. We continued on to Playa Carola in the hope of seeing some birdlife – our host had said we might see blue footed boobies or frigate birds here, but all we saw were more sealions, iguanas and crabs.

Our hosts provided us with a mini tour of San Cristobal island which took us to the crater Lake of El Junco, a tortoise breeding centre and to an idyllic beach at Puerto Chino. At El Junco we all enjoyed the cooler temperature due to the altitude and took our time walking the path around the lake. There were many frigate birds diving into the water, apparently to wash the saltwater off as well as to drink the freshwater. The tortoise centre has saddleback tortoises on this island, and we saw a mocking bird eating a grasshopper! The beach at Puerto Chino was beautiful, but our guide had warned us about the horseflies – they wouldn’t leave us alone and we couldn’t even escape them by going in the sea. Any exposed skin and they’d be there about to bite, but we managed to keep them at bay mostly, sustaining only a few bites. The presence of these pests really spoiled or enjoyment of this place, but as tourists visiting what was once a pristine environment, now with a permanent human population, we have to accept that we are potential carriers of unwanted invasive species (we are one ourselves) and we are contributing to the issues being faced on these unique and beautiful islands.

For our last evening on the Galapagos we returned to Punta Carola, and Elliot was finally persuaded to snorkel here to try and see turtles – he hadn’t managed to see any in the water up to now. His efforts were rewarded and he was very excited to have seen and stayed close by to a turtle for a while. As the sun set and people headed home the sealions came up onto the beach, reclaiming it as their own. Frigate birds also appeared and were settling into one of the trees as we headed home in the dwindling light.

After our two nights on the island, we left the Galapagos on a fairly empty plane, from San Cristobal airport to Guayaquil, Ecuador. Note that flying into Santa Cruz from Quito and out of San Cristobal to Guayaquil worked out cheaper than any return journey options that we looked at. The Air Latam site made this booking process quite straightforward.