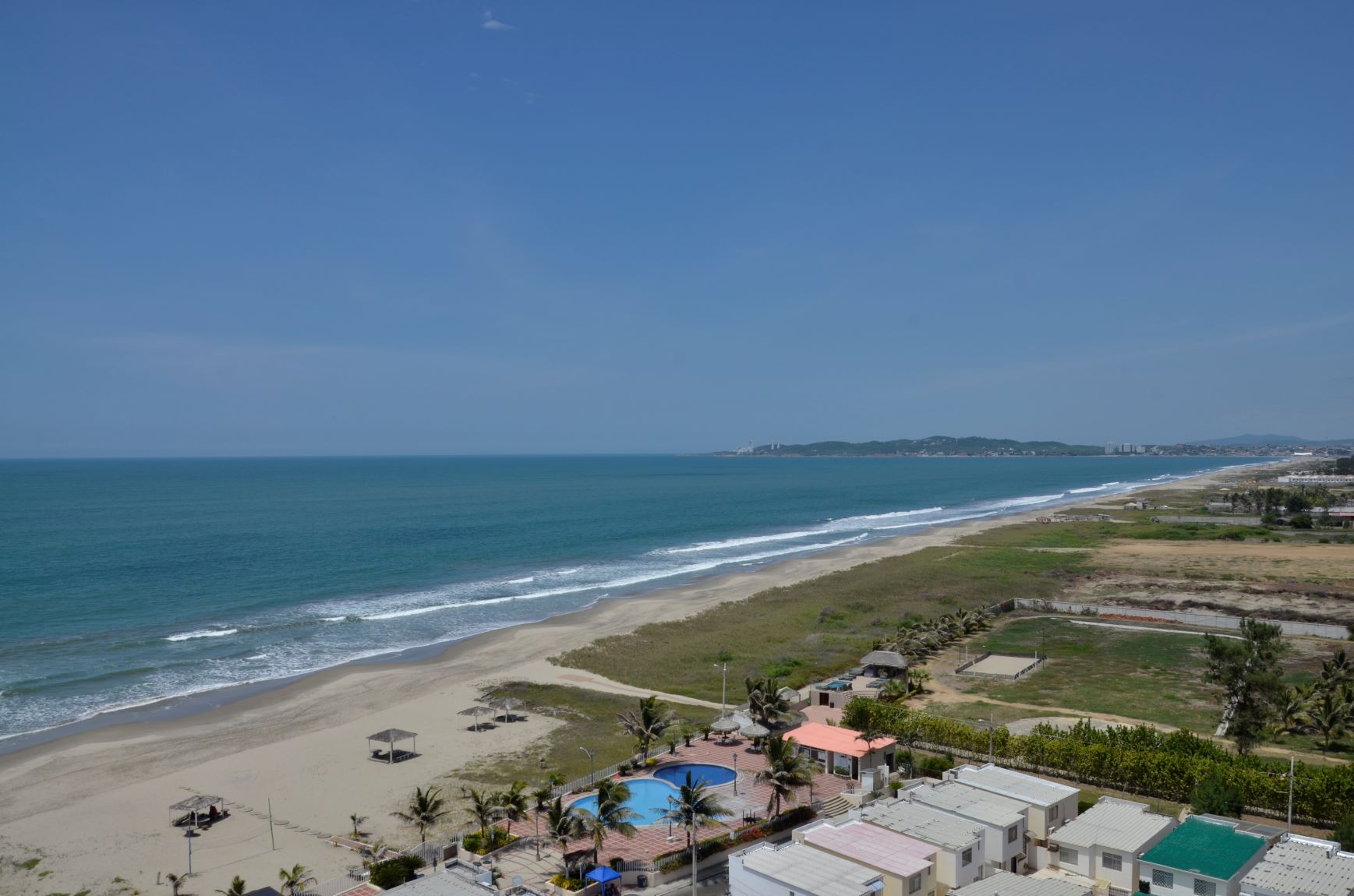 After landing in Guayaquil (H-why-a-keel) – a huge port in Ecuador, we took a taxi to the bus station (Jaime Roldos Aguilera Terminal Terrestre). It is a huge multi-level building merging a large shopping mall with the ticket offices and bus terminal, and finding the right bus and departure point was a little overwhelming. However, we managed to get on the correct bus to Playas where we had an apartment booked for a few days of rest and relaxation by the beach. We had promised the kids some time to play in the pool and by the beach – a little holiday before our return home. Holiday? yes, really! – Constantly being on the move is quite exhausting!

Our apartment was on the 10th floor of a fairly new complex, about 5km south of Playas, that seemed to be a mix of holiday lets and private residences. We met with a chap who spoke absolutely no English (and only very fast Spanish) but who managed to get us in, show us around and supply us with keys. The day after our arrival, we ventured out to a nearby shopping centre to stock up on food so we wouldn’t have to go out again… Our apartment was not close to any amenities, but on the main road outside we hailed a bus and made the short trip to the shopping centre $1 for all of us!

The beach next to the apartment was one of the worst we’d seen in terms of litter along the tide line – a lot of washed-up plastics and rope / fishing nets. Apart from a few dog walkers and one or two other tourists, the beach was deserted, which given, the location, wasn’t very surprising. There are more easily accessible beaches nearer to Playas.

At the end of our stay here, we travelled back to Guayaquil, again by bus. However, this time we waited ages in scorching heat for the right one, and this bus stopped for every person flagging it down, so it took a while. However, it was cheap, air-conditioned and we knew we would get there in the end.

In Guayaquil, the malecon boardwalk, a few blocks east of the shoe and clothes shopping district that we were staying in (a fairly noisy, but lively area!) was worth a visit, but we saved this for the evening once it had cooled down outside. We wandered along as far as La Perla, a big wheel which we decided to go on, to give us some good views of the city. We also stumbled on Iguana Park (Parque Seminario) and the impressive Guayaquil Cathedral on the walk back to our accommodation – I wasn’t expecting a park full of iguanas in the middle of the city! They are very tame, and are well fed (you can buy bags of feed in the park) by the locals.

We visited the Artisan market here. As we were nearing the end of our trip, we had decided this would be a good place for souvenirs as we wouldn’t have to carry them around for too much longer. We got a few things, although we had assumed everything we had seen on the Galapagos would be available here with a lesser price tag – it wasn’t.

We travelled back to Quito by plane and then onto a hotel in Tababela for one night, to collect our luggage we’d left there before going to the Galapagos. We went out for lunch in Tababela, just off the very well kept park (Parque Central) and were treated to a random act of kindness from a Finnish mechanical engineer who spoke English and was lunching on his own. We had a good chat with him, and he paid for our lunch without us knowing – just telling us on his way out.

Our next destination was a ‘country house’ owned by the parents of one of the lads (Willy) we had volunteered for in San Rafael. So we took a taxi to their home near Pifo – after a trip to the supermarket as we had been warned this house was in the middle of nowhere. After meeting Willy’s family and being shown their animals and the neighbours garden – where we tried passion fruit straight from the trees (this went down particularly well with the kids) and guaba (known as ice-cream bean) which is a green bean, and you eat the white fluffy stuff that surrounds the seeds.

Just about finding space for our bags in the back of their pickup, which also contained an old gas cooker and cylinder, we all crammed onto the back seat and were taken to the country house Rancho Barrotieta – it really was in the middle of nowhere, down a dirt track past some cement works. It was very peaceful though, with marvellous views out across the valley. They had some pigs in a shed in the garden which Elliot especially was interested in.

From here we had one last trip we wanted to do – a trip to the Amazon jungle. After much research and thought, we decided to go to the area near Tena – not deep into the jungle, but enough to give us the flavour of it. So leaving at 5am by taxi, to get through to Baeza before the daytime closure (due to a recent landslide) we travelled to Punta Ahuano where we would catch a canoe to our lodge. The journey was several hours long and the scenery incredible and remote – the sides of the mountains here are so steep, it’s not surprising there are landslides which take out the road. Some sections – especially where the road repairs were ongoing we fairly hair-raising! I’m glad we were in a taxi and not a bus..